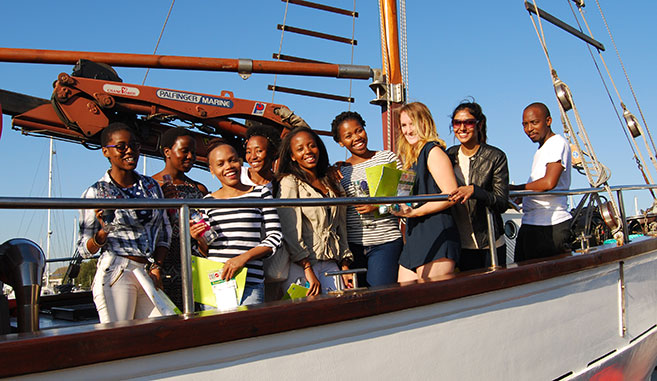 Students on board the R/V Angra Pequena excitedly awaiting the official research expedition.

A group of 15 third year and honours students from UKZN’s Marine Biology Programme recently took part in the Ocean Stewards programme during which they met some of South Africa’s top marine biologists and geologists and took part in studies on board the Angra Pequen, a research vessel working on the KwaZulu-Natal coastline as part of the African Coelacanth Ecology Programme (ACEP).

The programme is sponsored by Grindrod and Wildlands as part of their joint Blue Fund initiative, as well as by Sea-Quests, who together have established the Ocean Stewards Programme as a means to develop and attract more students into the marine conservation sector.

Said Conservation Grants Manager for Wildlands, Mr Mark Gerrard,: ‘By building capacity and bringing a new generation of Ocean Stewards into the marine sector, Wildlands hopes to address the key challenges facing marine environments such as degradation, overfishing and pollution.’

‘Unlike coastal universities in the Western and Eastern Cape which have vessels and technical staff, UKZN students have no opportunity to go out to sea so this was great for them,’ said senior lecturer in UKZN’s Marine Biology programme, Dr Ursula Scharler. ‘We hope that funding will continue so that the Ocean Steward Programme can extend over the next few years.’

Scharler and Dr David Glassom of the School of Life Sciences on the Westville campus were involved in choosing the students and organising involvement in the programme for UKZN.

Studies were done of the offshore canyons and seafloor (reefs and soft sediments) and associated fish communities and plankton and oceanography.

‘By linking the Ocean Stewards programme into the ACEP Surrogacy project, we aim to conduct vital research work while catalysing the emergence of a strong cohort of future marine conservation scientists and managers,’ said Dr Jean Harris of KZN Wildlife.

Students were also given an introduction to sailing techniques on the opening day of the programme, including a tour around the Angra Pequena.

‘I am so fortunate to be a part of this programme and was really excited to head out to sea on the research vessel,’ said UKZN honours student, Asanda Mthethwa. The cruise set off on the 4 June and returned to port on the 24th.

- Supported by The Blue Fund - a strategic partnership launched by Grindrod and Wildlands to provide funding and support for the sustainable development of coastal communities and conservation of coastal and marine ecosystems.