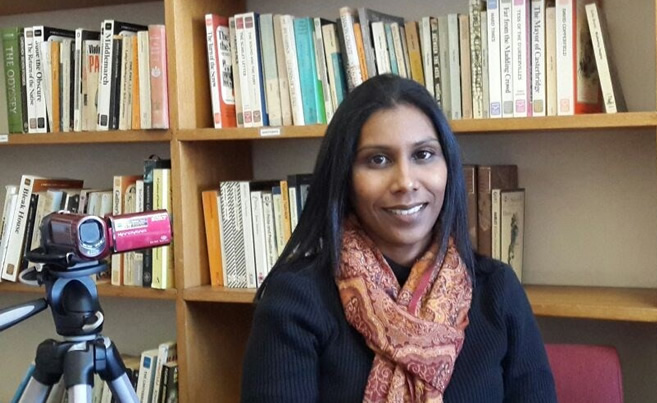 Empowering women through film was the focus of ground-breaking research by a lecturer in Film Studies in the Department of Media and Cultural Studies, Ms Subeshini Moodley.

Moodley’s PhD dissertation titled: "Narrative Possibilities in a Postcolonial Context: Exploring Self-Reflexive Film as a Critical Articulation of the Stories of South African Hindu Women", was sparked by her passion for film and her interest in feminist theory, combined with an eagerness to contribute to the upliftment of women.

‘I have a personal interest in feminist issues and how Indian women are represented through mainstream media. I felt that if women had the means to represent themselves, they would offer a challenge to dominant representations of themselves.’

Speaking about her research, her supervisor, Professor Anton van der Hoven, said: ‘Ms Moodley’s PhD work was deliberately and highly creatively situated at the interface of the academy and everyday life, critically analysing the identities of South African Hindu women and promoting their development by requesting the research participants to construct their own video narratives.’

Moodley explained that she contacted South African Hindu organisations for women to participate in her project, and four women responded. Three of them continued with the project to the end, while the fourth was forced to stop midway due to illness.

Workshops were held to teach the women the basics of film-making and equipment literacy, after which they were required to make a film about the story of their lives by shooting their own footage, with cameras provided through a research grant.  Further workshops were held to collaboratively view footage and provide feedback and assist with editing.

She said there was a two-fold purpose to her research - a social development purpose ‘where the women learned about themselves’, and an educative purpose ‘where my practical film-making skills and my skills as someone who teaches film, became useful to other people.

‘Social development and community engagement are only effective if the scholar as an activist can simultaneously teach to and learn from the communities where they work.’

Moodley said her research had helped empower the women in the project in different ways. ‘One of my participants used film as a tool for her feminist standpoint, another used the film as a way to claim a space of representation, because she felt that she never had that opportunity before. The third woman used the process of film-making as a form of therapy to work through her issues related to a poverty-stricken background and abusive marriage. And then, for me, it was a journey of discovery.’

Moodley says it was challenging studying for her PhD as it meant juggling the roles of wife, mother, lecturer and student, but she constantly reminded herself that she needed to complete this project because she owed it to her participants, to the generations of women in her family past, present and future… and she owed it to herself!

Moodley thanked the many people who had helped make her work a success, especially her research participants for giving her their time and sharing their lives so openly with her, and her PhD supervisor, Professor van der Hoven.

Van der Hoven said Moodley’s research was highly commended by her examiners, ‘It came as no surprise that one of the world’s leading authorities in visual ethnography, described Subesh’s work as not only "excellent",’ but also as a "change-making project" where original methodology was simultaneously "convincing and innovative" but still "intimate and empathetic".

Moodley hopes to be involved in a project related to the 16 Days of Activism in the next few months in which she will be working with the same research participants.

She also hopes to continue to build film studies at UKZN, increase student numbers and seek out sources of funding for specialised editing programmes and computers.

Van der Hoven described Moodley as ‘one of a rare breed, a truly original and deeply committed researcher. Research of this calibre cannot and should not be judged in terms of the number of years it has taken to complete but on its contribution to the development of cultural studies in South Africa.’

Merusha Naidoo
In This Issue