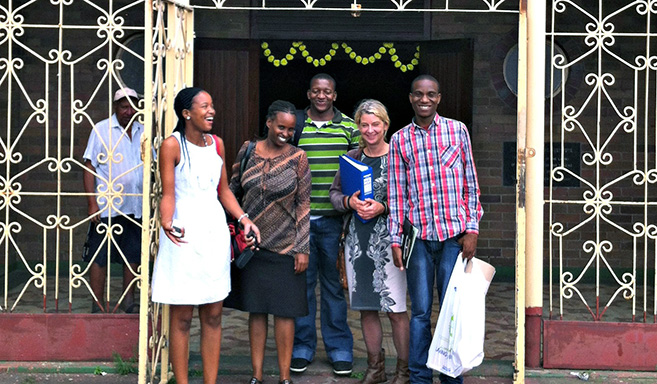 The SARChI team at the Clairwood Tamil Institute.

In partnership with the Leverhulme Centre for the Study of Value and the South Durban Community Environmental Alliance (SDCEA), the UKZN team conducted research aimed at highlighting alternative socio-economic elements which may have been missed from previously written reports on the economic value of the port expansion as well as providing input on how residents perceived value within their community.

The meeting was an opportunity for the community to comment on the research findings and the process to date.

In attendance were the South Durban Community Environmental Alliance’s Mr Desmond D’sa and UKZN’s Professor Sarah Bracking, who both helped to facilitate the workshop.

The SARChI team gave presentations on the varying aspects of the report. Development Studies PhD candidate Mr Danford Chibvongodze assisted by masters student Ms Ayanda Tshabalala presented on the theme, “Business and Economic Activities in Clairwood”. The presentation highlighted business enterprises in the area, with emphasis on informal activities there.

Chibvongodze highlighted how the mix of formal industry and informal trade boosted the economy of the area providing various employment opportunities for residents.

‘Findings from our study show the area suffers from severe neglect, particularly in terms of basic municipal services such as waste collection as well as the general maintenance of the area. While many Clairwood residents receive municipal services at their homes, others experience poor sanitation due to lack of water and toilets facilities,’ said Lombo.

Research Manager Ms Kathleen Diga and masters student Ms Mbali Mthembu presented on community social cohesion, sense of belonging and the immaterial values which have been established in the area since the community started building 150 years ago.

‘Many of the schools and places of worship were built by the community. These historical places bring about social cohesion and there is a perception of racial harmony and a rich diverse culture in the area,’ said Diga.

The presentation also revealed Clairwood was a close-knit community with people helping each other in times of hardship.

Masters student Mr Tawonga Rushambwa and SARChI Chair Professor Sarah Bracking gave a brief presentation on how large infrastructural development affects communities such as Clairwood. The presenters emphasised that the area should remain as it is because of its historic heritage and diversity.

It was suggested by the community that development should rather take place in the eastern industrial zone in order for the expansion to not encroach into residential areas, but still create economic development.

‘The residents were very vocal against uninformed development, with many saying the government was biased towards the needs of business and this preference was to the detriment of local residents. They felt they were not properly consulted about the proposed expansion,’ said Lombo.

Residents were also worried they would lose their homes, businesses and jobs, and would not be able to secure  opportunities anywhere else. ‘The residents were concerned around safety as they have seen an increase in illegal businesses on residential properties while trucks on the roads were causing many accidents.

‘Residents hope the government will provide them with much needed housing, water and electricity rather than move them away as this would disrupt a currently strong cohesive community with important historical ties to Clairwood,’ added Lombo.