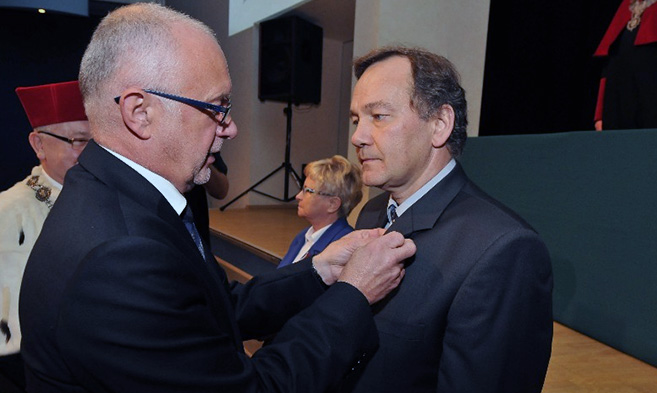 Professor Jacek Banasiak of the School of Mathematics, Statistics and Computer Science has been awarded Poland’s Silver Cross of Merit for his “significant contribution to science”.

Banasiak was invited by the President of Poland, Mr Bronislaw Komorowski, to receive the decoration at a ceremony in Lódz.

The Cross of Merit is a Polish civil state award established on June 23, 1923, to recognise services to the State. It is one of the highest civilian awards in Poland and ‘is given to citizens who go beyond the call of duty in their work for the country and society as a whole’. The Order has three grades: Gold Cross of Merit, Silver Cross of Merit, and Bronze Cross of Merit.

Professor Kesh Govinder, Dean and Head of UKZN’s School of Mathematics, Statistics and Computer Science, said the award came as no surprise. ‘Jacek is an outstanding Mathematician, among the best on the African continent and has a stellar international reputation,’ said Govinder. ‘Professor Banasiak continues to bring honour to the School and UKZN through his research and many professional commitments. He is largely responsible for the excellent reputation we continue to enjoy internationally.’

Banasiak obtained his MSc (Engineering) from the Technical University of Lódz in 1981, followed in 1989 by his PhD - based on elliptic and parabolic problems in irregular domains - from Strathclyde University in Glasgow.

Banasiak has a long career of service to Mathematics in South Africa having joined the Department of Mathematics and Applied Mathematics at the former University of Natal (UN) in 1992.

In 1999, he received a Doctorate of Science (DSc) from the University of Warsaw and in 2004 was a visiting Professor at the University of Franche-Comte in France. Banasiak held the position of Head of UKZN’s School of Mathematical Sciences from 2005 to 2007.

He has co-authored six research monographs, authored and co-authored more than 100 refereed research papers, has a Google Scholar list of close to 1 200 citations (giving an h-index of 180) and has presented at international or national conferences, workshops and schools. He has successfully supervised and co-supervised nine doctoral and more than 20 masters students at various universities.

From 2014, he has been the Leader of the UKZN node of the Department of Science and Technology/NRF Centre of Excellence in Mathematical Sciences.

Banasiak is also an Editor-in-Chief of the journal Afrika Matematika (Springer) and an Advisory Editor of Mathematical Methods for the Applied Sciences (Wiley), and the AIMS Library Series of the Cambridge University Press.