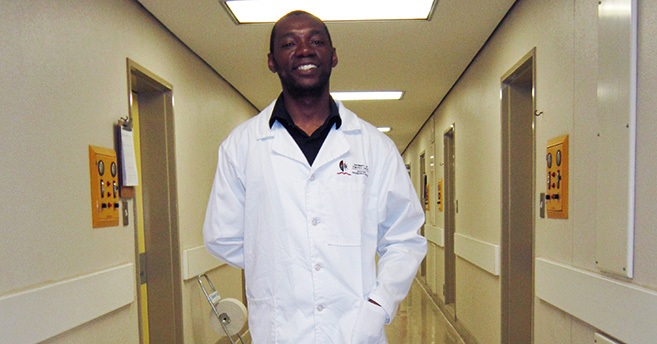 The Masters candidate has successfully completed a pilot study – conducted jointly at UKZN’s School of LMMS and the Department of Electronic Engineering – which found that normal blood plasma changed its electric properties as compared to the blood plasma of patients with Alzheimer’s disease.

The aim of the study was to use an animal model to search for a novel biomarker that reflected the cognitive impairment of Alzheimer’s disease.

Dalle said: ‘The lack of reliable biomarkers has made the evaluation of new treatments difficult.’

Dalle says because neurodegeneration is irreversible, the study set out to investigate biological markers (biomarkers) of Alzheimer’s disease for an early diagnosis of the disease. ‘In so doing, we knew that it could give us a chance to discover how to predict the disease or even to specify the population at risk of developing the disease later on in their life.’

Dalle won R15 000 towards attending a conference of his choice when he presented the study at the College of Health Sciences Research Symposium in 2014.

‘It’s always a good feeling when you win a prize at such big event. This prize belongs to my supervisors, the neuroscience team of UKZN, and the staff of the BRU-UKZN. It’s a collective achievement,’ he said.

‘The brain is one of the most complicated organs of the body. Brain diseases are multiple but few can be totally cured. When you start a project research on one of these brain diseases, you don’t know if it is going to be a success because it demands focus, precision, experience, hard work, patience and time.’

Dalle said he liked challenging himself to solve problems. ‘That’s what makes me passionate about this area of research.’

Dalle holds a Bachelors degree in Animal Physiology, Honours in Medical Sciences (Human Physiology) and intends to convert his Masters to a PhD. UKZN was his institution of choice because of its ‘infrastructure and equipment that provides a perfect environment for researchers to produce good results at international level’.

Dalle said he was grateful to God and his research supervisors for their unyielding support. ‘My family and the neuroscience team have also been a great support in my studies until now.’