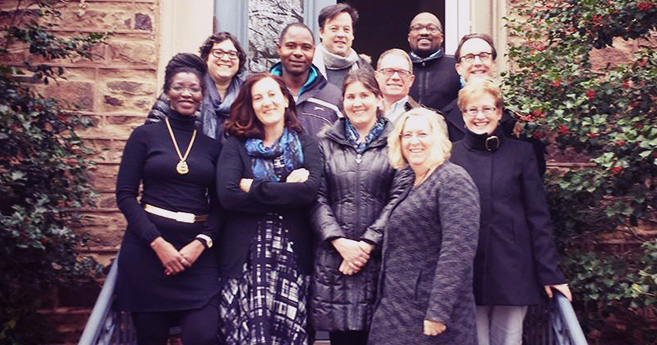 Professor Cheryl Stobie (far right) with participants at the Figuring the Queer in African Literatures and Cultures Conference.

English Professor Presents Paper at Princeton University in the US

Lecturer in English Studies on the UKZN Pietermaritzburg campus, Professor Cheryl Stobie,  was recently invited to present a paper at the Figuring the Queer in African Literatures and Cultures conference at Princeton University in the United States.

The paper analysed representations of bisexuality, dance and social critique in a Senegalese film, Karmen GeÏ, hailed as the first African musical, and a striking adaptation of the Carmen story.

The paper examined ways in which the film depicts bisexuality as a complex, queer site that destabilises stereotyped gender roles and conceptualisations of sexual identity. Being invited to present work-in-progress at this conference was seen as a privilege, an inspiration, and an opportunity not to be missed.

The Conference provided a platform for face-to-face debate by authors focussing on Africa, queer theory and textual analysis. The papers were pre-circulated, and 45 minutes were spent discussing each paper, with advice given to the author on how to make the article, and thus this historic issue, as strong as possible.

Advice was also offered to the co-editors on how to frame the introduction, which was seen as a definitive moment for the emergent field. Some of the participants, including Stobie, have been working in queer studies within the African context for some time.

She has published widely in the area of fictional and autobiographical representations of lesbian, gay, bisexual, transgender and queer (LGBTQ) sexuality in South African and other texts, both written and visual. She has published a book and numerous peer-reviewed articles, chapters in books, critical reviews of books, encyclopedia entries, and conference proceedings on various representations of queer.

‘Other participants in the Conference were new to the field,’ said Stobie. ‘The opportunity to sit down and wrestle through some of the issues and challenges facing the cross-disciplinary area was not just constructive, but often moving.

‘Given that many of the participants experience hostile or ignorant responses to their work, whether from those who oppose queer studies or those who have stereotypes about Africa; engaging with others who had done research on these matters was a valuable, intense and extraordinary experience.’