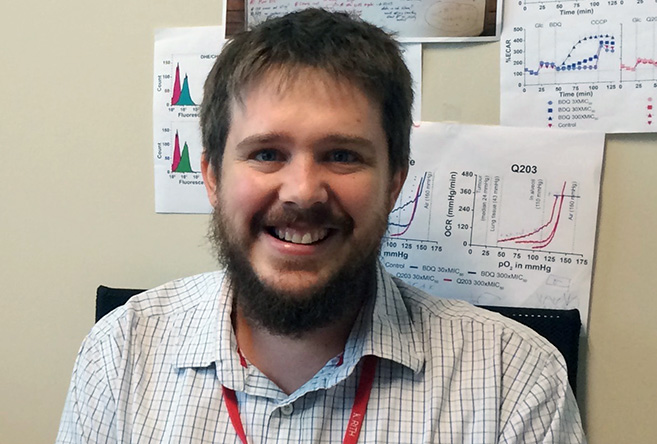 Through using this method the study discovered that two of the new anti-mycobacterial drugs induced an unexpected and surprising increase in Mtb oxygen consumption.  This finding contradicted current understanding of the mode of action of these drugs and is of major significance for future tuberculosis drug discovery and development efforts.

As a result, Lamprecht has spent the past few months determining the mechanism of action of this increase.

He was invited to present some of these results at the 2nd H3-D Symposium on Innovative Approaches to Tuberculosis Drug Discovery in Zambia last year, and this has led to the Steyn Lab at K-RITH collaborating with medicinal chemists at the University of Cape Town, with Lamprecht characterising their new anti-mycobacterial drug compounds.

‘My decision to join Dr Steyn’s K-RITH laboratory was twofold,’ said Lamprecht. ‘Dr Steyn has a long and outstanding publishing record as a TB research scientist, and KwaZulu-Natal is also the epicentre of the TB/HIV co-infection and the MDR-and XDR-TB epidemics, which makes UKZN and K-RITH unique institutions to study Mtb, the causative bacteria of TB.

‘Being confronted with the devastation being caused by TB on a nearly day basis, makes you think differently about basic science research and forces you to find clinical applications for everything you do,’ he said.

Lamprecht is currently involved with several projects centred on Mtb bioenergetics; the role it plays in latency and persistence of Mtb inside the human host and how the findings can be translated into clinical uses.

‘Using the methods for studying Mtb bioenergetics I have developed by adapting existing mammalian cell technology, we have made tremendous strides in understanding the effect anti-mycobacterial drugs, carbon sources and specific virulence genes have on Mtb bioenergetics.’

‘Being a Postdoctoral Research Fellow at K-RITH and funded by the UKZN CHS Postdoctoral Scholarship has opened my eyes to what world class tuberculosis research should look like.  During my time here I’ve had numerous opportunities to learn from and interact with the international scientific community, both at scientific meetings and from visiting scientists, on a more intimate level.’

Lamprecht said it was very important for the development of young African scientists to learn from the international scientific community and to apply what we have learned to create a robust African anti-mycobacterial drug development network through which they will be able to confront the TB epidemic with their own novel ideas and insights.

‘Being able to do world class research at K-RITH and UKZN will help me to achieve my aspirations of being part of and helping to build a strong African anti-mycobacterial drug development network, something I feel really passionate about.’

Lamprecht hopes to present his research at two international scientific meetings in the USA (March) and Spain (July), and he intends to publish at least two more research articles that directly flow from the manuscript currently in preparation.

One of Lamprecht’s long-term goals is to start up his own laboratory.