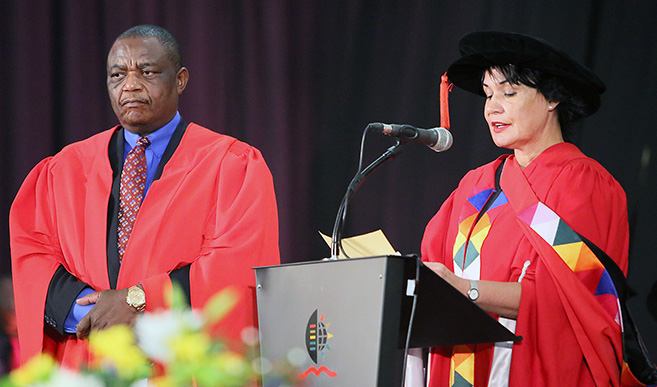 Zimbabwe Defence Forces Commander General Constantine Chiwenga recently graduated with a PhD in Ethics from the College of Humanities.

‘I feel very humbled and most thrilled to have attained this achievement. I thank God for giving me the strength. This will remain one of the most unforgettable highlights of my academic life. ’

His PhD was the culmination of his freedom fighting experiences and the questions that arose thereafter resulting in his thesis, “The Predominance of an Ethic of Double Standards in the United Nations Security Council Humanitarian Intervention Missions:  A Critical study based on the Ethical theories of Mutual Aid and Equal Recognition”.

One of the major findings of his research was that national self-interest of P5 (members of the UN Security Council) members inevitably undermine the moral integrity of this world organisation in its quest to resolve international conflict and security issues.

‘This finding was predicated on numerous case studies which, sadly, reveal a precipitous decline of UN moral stature, particularly in the eyes of the developing world. Another worrisome finding was how the notion of “responsibility to protect” was being abused by some P5 members to aggress independent-minded sovereign states, in their pursuit of national self-interests.’

Chiwenga  hopes his research will benefit society in an academic/scholarly capacity by assisting in stimulating further research in the context of reforming the Security Council, in line with the current global political, economic, military/security and social dynamics.

And that the research, to some extent will influence strategic policy at regional and international levels in as far as what needs to be done to find a workable and sustainable formula of reforming the United Nations Security Council (UNSC).

The key challenge for Chiwenga was in balancing national duties and research demands of the study but through his supportive family and friends, he succeeded and is appreciative of their significant support.

Despite such a challenge, Chiwenga noted that during his studies he was able to interview politicians, diplomats, bureaucrats and academics, in the region and beyond who were conversant with his area of research study. Some of those interviewed included Kenneth Kaunda (Zambia), President Joseph Kabila (DRC), President Robert Mugabe (Zimbabwe) and even Reverend Frank Chikane (former South African Director-General in the Presidency).

His advice to other students is to have scholarly determination, hard work and discipline. ‘Whilst it is always difficult to meet the submission deadlines, I urge them all to work extra hard. Yes, at times a thesis supervisor can be tough, but they should remember that his or her toughness on you is meant to make you a scholar who at the end of the day produces a commendable and quality research work.’

Asked about his future academic plans, Chiwenga said, ‘I look forward to writing a book which will be a conversion of this thesis. UKZN has a reputable publishing house (UKZN Press); I plan to approach them to that end. I also intend to publish articles in reputable journals and these articles would be in line with my area of research interest.’

‘Besides my current professional tasks, I would contribute to the academia through the delivering of guest lectures and making presentations at conferences and seminars within the region and beyond.’