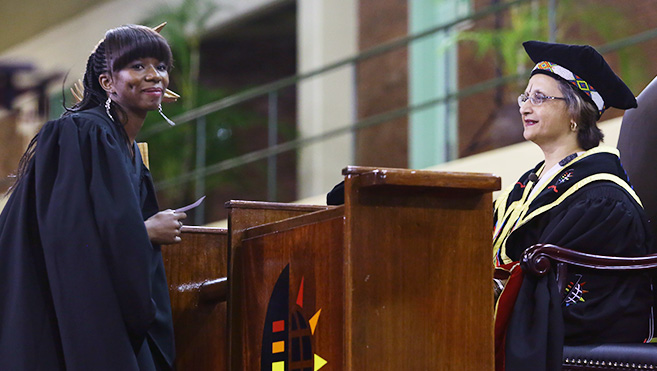 Nonzwakazi Ntombela graduated with a Masters of Medical Science.

The study, titled: “Soil Transmitted Helminths and Schistosomiasis,” was conducted by Ms Nonzwakazi Ntombela for her Masters of Medical Science (Public Health) degree which was awarded to her at a UKZN Graduation ceremony.

Ntombela said this was a descriptive cross sectional study undertaken at two clinics. ‘The aims were to assess the prevalence, intensity, species and risk factors for infection in pregnant women.'

The research found a high prevalence of infection in pregnant women.

Ntombela, who was supervised by Professor Joyce Tsoka-Gwegweni, said the findings called for urgent attention to reduce maternal and child complications related to parasite infections.

‘These include several complications such as but not limited to; low birth weight babies, iron deficiency anaemia and lowered efficacy of treatment against TB and HIV and thus faster progression of the diseases.’

According to Ntombela, the work performed is very important and very relevant at the public health level ‘because it involves pregnant women who are regarded as the vulnerable group and also neglected diseases’.

She said her research was unique in terms of the South African context. ‘Country specific information is required to implement strategies or policies regarding intestinal parasites. This is because prevalence differs between countries and within countries, and also between different populations.’

She agreed that her study was not unique to Africa, but was the first one to be conducted in South Africa, being completed at two Durban clinics.

‘This was a very interesting topic. It saddens me that such infections are receiving minimal attention yet they have highest morbidity, not only in the pregnant population but also in children,’ she said.

‘Prevalence of up to 100% in South African children has been reported, which has implications influencing educational performances and cognitive development,’ said Ntombela.

The methodology was very interesting and gave a lot of exposure because it involved engagement with several stakeholders, including the National Department of Health, local authorities and pregnant women. The study was approved and completed in three years.

Ntombela is currently planning to register for a PhD in Public Health Medicine and is also working on her manuscripts for publication.

‘I am interested in research, parasitology, maternal and child health and also improving health systems to deliver efficient services in the health sector.’

She grew up in Elandskop, a rural area just outside Pietermaritzburg, with her grandparents, uncles and cousins.  She says her family is very supportive and encouraging. ‘I was the first to obtain an honours degree in my family and now the first with a masters degree. I have many people who look up to me and I have encouraged some members of my family to pursue tertiary studies. This has never been an easy journey but through so many struggles, I managed to make my family proud again.’