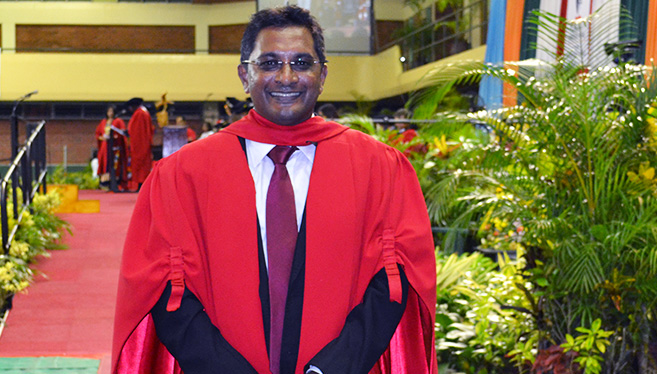 Maternal deaths in the intervention group dropped significantly after a novel study that conducted in 18 district and regional hospitals of KwaZulu-Natal by UKZN Lecturer, Dr Mergan Naidoo, from Glenmore who graduated with a PhD on 15 April 2015.

Naidoo who Heads the Family Medicine Department’s Clinical Unit and is the maternal assessor for KwaZulu-Natal’s Department of Health (DoH) said maternal health was a major health priority both in South Africa and globally, observing that anaesthesia and surgery are associated with a 2.5 times greater risk of death in pregnant women in South Africa compared to having a normal vaginal delivery.

Supervised by UKZN’s Professor Jack Moodley, who is also the chairman of the National Committee on the Confidential Enquiries into Maternal Deaths, Naidoo’s study reduced maternal surgical morbidity and mortality in the province by implementing the modified World Health Organization (WHO) surgical safety checklist for maternity care (MSSCL) in the maternity operating theatres of randomly selected district and regional hospitals in KwaZulu-Natal.

The study design was a cluster randomised control trial and study sites consisted of 12 district and six regional hospitals. Naidoo received the Discovery Foundation Academic Scholarship and the MEPI Entrée Programme bursary towards his PhD and evaluated the surgical outcomes as well as the pre and post-intervention safety attitudes of staff working in maternity operating theatres.

‘The use of the MSSCL in LMIC is expected to have significant effects on safety culture and outcomes. However, leadership in implementing such checklists, adequately reporting adverse effects, and ensuring that ongoing monitoring and evaluation are critical in reducing the maternal morbidity and mortality in LMIC's health facilities that are challenged by staff and resource constraints.’

He further suggested the widespread implementation of the MSSCL in KwaZulu-Natal, the monitoring and evaluation of adverse surgical outcomes, and the introduction of the MSSCL in undergraduate and postgraduate training programmes may be key to improving patient safety in the province.

‘I do not recall working this hard for this long in acquiring any of my previous degrees so having completed the PhD, it is great to now sit back and savour the moment. It feels awesome,’ said Naidoo.

Naidoo said the PhD did come with great sacrifice in terms of late nights, weekends and vacation leave that turned into ‘PhD leave’ but six months of sabbatical leave as well as his family, supervisors, mentors and colleagues really supported and helped him to focus of his study.

Asked what made him passionate about being a lecturer, Naidoo said: ‘I think that if you can stimulate a young mind to be a critical thinker and keep on asking questions, I would have achieved my goal as a teacher.’

Naidoo is the chairman of the KwaZulu-Natal Coastal Branch of the South African Medical Association (SAMA), the National Councillor for SAMA and a member of the Education Science and Technology subcommittee of SAMA. He is an elected councillor for the College of Family Physicians (CFP) within the College of Family Physicians and chairman of the MCQ writing group for the CFP, a member of the SA Academy of Family Practice and he sits on various committees in the KZN DoH and the University.

Naidoo said he also belonged to the provincial Emergency Care consortium, the Acute Care for Africa Research and Training Group, the Greytown Feeding Project as well as the Phoenix Villagers Athletic Club. In 2013 he completed his 10th Comrades Marathon.

Naidoo recently received  the Individual Rural Fellowship Award from the Discovery Foundation. ‘The plan for this award is to use the funds to develop an educational programme and roll out a “Train the Trainer” programme on maternal surgical safety for the province of KZN.’

He said he hoped to now look at closing the research loop by implementing his research ideas in all maternity operating theatres in the province.