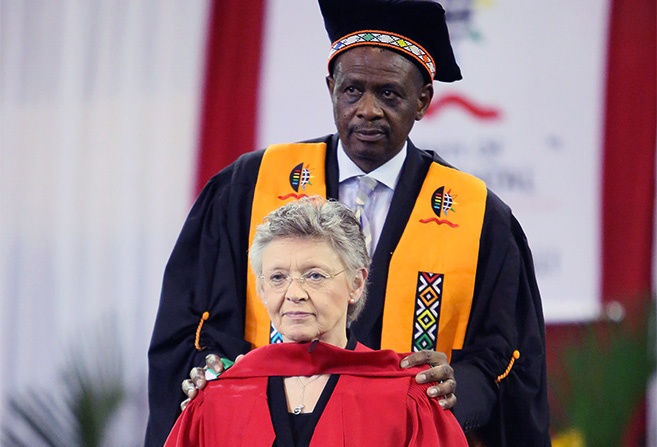 Nobel prize winner Dr Francoise Barré-Sinoussi has been awarded an honorary Doctor of Science degree by UKZN in recognition of her ground-breaking discovery and contribution to humanity.

Barré-Sinoussi and her former mentor, Dr Luc Montagnier, were awarded the Nobel Prize in Physiology or Medicine in 2008 for identifying the human immunodeficiency virus (HIV) as being the cause of AIDS. That highly significant discovery revealed an urgent need for diagnostic tests to aid in controlling the spread of the disease and to allow the development of treatments that now keep people with HIV alive.

The discovery has also been the basis for prevention of mother-to-child transmission and the development of vaccines against HIV, all of which play a role in limiting the spread of the global pandemic.

Barré-Sinoussi initially worked as a Retrovirologist at the Pasteur Institute in Paris, a not-for-profit organisation focusing on infectious diseases. It was at this institute that she was approached by scientists in the early 1980s, urging her to help them find what was causing the AIDS epidemic. Three decades later, Barré-Sinoussi is Director of the Retroviral Infections Unit at the Pasteur Institute.

Discovering HIV was a turning point in Barré-Sinoussi’s life as it was a moment that would cement forever her commitment to fighting the disease. Early in 1984, Barré-Sinoussi was invited to do a presentation at the San Francisco general hospital where she was introduced to a patient dying of AIDS.

She recalled: ‘I remember he wasn’t in very good shape but he took my hand and said: “Thank you. We are ready to fight this dreaded disease so keep up the great work”. Since that day, I still have that image in my mind. He died a few hours later but I was determined to find an end to this dreadful disease.’ Thus began Barré-Sinoussi’s career which has already spanned more than 30 years.

When anti-retrovirals (ARVs) were discovered in 1996. Barré-Sinoussi rapidly went into a state of depression as she reflected on how many people had lost their lives to HIV and AIDS whilst effective treatment was always available.

Barré-Sinoussi shared her thoughts on the progress made in the quest to find a cure for HIV. ‘Effective treatment might have been developed in 1996, but of today’s 34 million sufferers, only about a third receive it,’ she said.

‘Also, people are still really scared about being tested for HIV, even if they know that there is a treatment for it. Education is part of prevention, care and treatment. We can't say prevention is more important than treatment or vice-versa. If we do not treat the 35 million people who are already infected, the epidemic will continue. The treatment itself is also prevention as we can reduce the transmission to others. We should also campaign for the use of existing preventative tools, such as the condom, but also for the development of new ones.’

Barré-Sinoussi has actively promoted integration between HIV and AIDS research and programmes in poorer countries through the Institute Pasteur International Network and the co-ordination of the National Agency for Research on AIDS and Viral Hepatitis research programmes in Cambodia and Vietnam.

She continues to make a global contribution towards addressing the challenges of AIDS. Last year she became President of the International Aids Society, a global association of professionals and practitioners in the field of HIV and AIDS. She is also a consultant to the World Health Organization and UNAIDS.

She enthusiastically addressed graduates. ‘You are the future. The solution lies in your hands. One of the lessons I learned regarding the HIV epidemic is that the best response is a multidisciplinary response to the HIV epidemic, including scientists, humanitarians and the general public.

‘My last words are for you the young graduates. Together we can contribute to the advancement of science and the understanding of HIV. I wish you all the best in your scientific careers.’