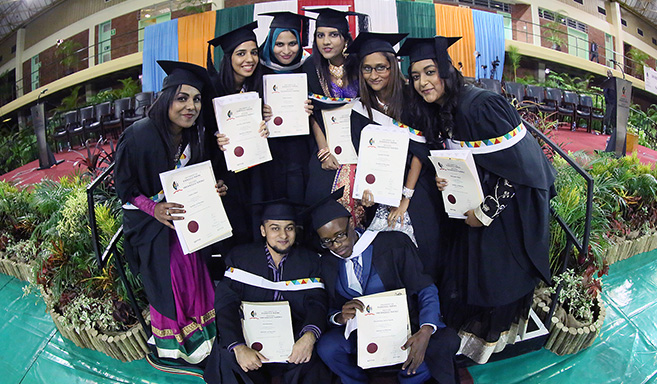 They join a pool of professional pharmacists trained by UKZN’s Discipline of Pharmaceutical Sciences to practise competently in all spheres of Pharmacy including community, retail, hospital, industry, Pharmacy education and training, academia and pharmaceutical research and development.

Ngcobo (23) of Umzumbe on the KwaZulu-Natal South Coast was named Best Overall Pharmaceutical Sciences Student and Best Pharmacology Student. He scooped the awards at the 2014 Oath-Taking and Awards Ceremony held for final-year students.

‘It didn’t come as a surprise to me,’ said Ngcobo. ‘It was more like a dream come true because I worked very hard towards it.’ He is currently doing his internship at Addington Hospital ahead of pursuing either an LLB degree or a Masters in Pharmacoeconomics.

‘It is an honour to attain such a remarkable achievement. I am proud of myself for having worked consistently hard over the past four years and maintaining a high level of focus and determination which is not always easy for young people today.’

The same sentiments were shared by Abdool of Umzinto who said: ‘When I received my results, my heart was filled with happiness and joy. I worked consistently throughout the four years and I’m glad that the hard work has harvested this successful result. It feels amazing!’

‘My success is due to the constant and endless support from my mother and family, my faith in God and prayer,’ said R K Khan Hospital intern, Mustaffa of Chatsworth. She said her passion for medicine together with her hard work and dedication were the ingredients for her success.

Discipline of Pharmaceutical Sciences Academic Leader, Professor Thirumala Govender, said: ‘The Discipline is extremely proud of these students and congratulates them on their outstanding performance.’

She said she looked forward to them translating these exceptional academic results into meaningful contributions towards improving pharmaceutical care services in the country. She also thanked the academic and support staff of the Discipline for their contributions to enhancing the teaching programme and the quality of students.