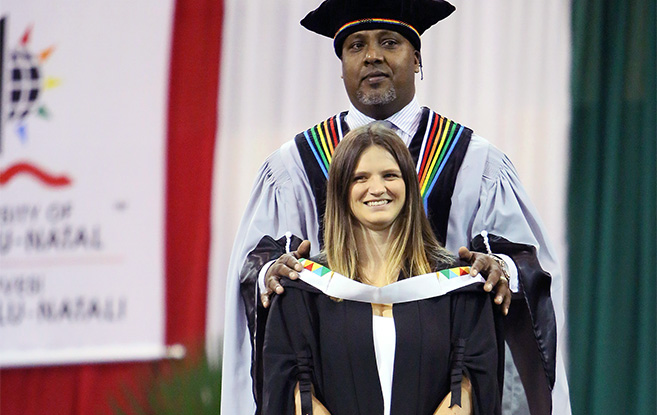 Service to others Vital for High Achieving Occupational Therapy Graduate

De Klerk was among UKZN Occupational Therapy students who took on the popular YouTube RAKnomination challenge and made the skydiving dream of wheelchair user, Daniel Ngcobo, come true last year - with Ngcobo in tow they parachuted out of a light aircraft!

‘It’s been the toughest yet most rewarding four years of my life. I’m relieved that the academic pressure is off me and I am thoroughly enjoying practising what I have learned.’

De Klerk was born in Pietermaritzburg and grew up in the KwaZulu-Natal Midlands. She said she was fortunate to attend the Wykeham Collegiate boarding school and was grateful for being sent to such a wonderful school as it prepared her well for ‘the real world’.

De Klerk, who is currently completing her community service year at GJ Crooks Hospital, wants to study further. ‘I plan to complete my Masters and PhD as soon as I figure out what field I want to go into.