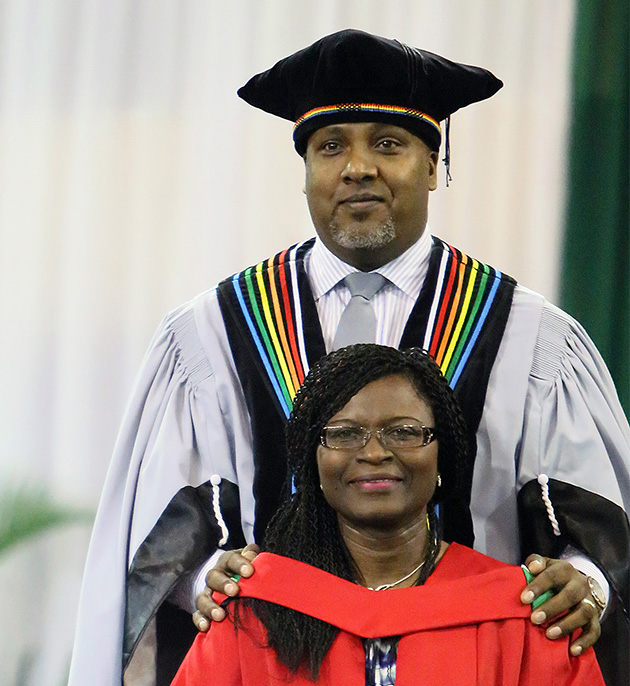 Dr Elizabeth Ojewole graduated with her PhD in Pharmaceutical Sciences.

The buccal mucosal route of administration is when the dosage form containing the drug is placed between the gum and the inner cheek so that the drug is absorbed directly into the bloodstream without having to pass through the gastrointestinal tract (GIT).

Ojewole said ARVs such as didanosine (ddI), tenofovir (TFV), saquinavir (SQV) and zidovudine (AZT) had revolutionised the treatment of HIV and AIDS, but she was concerned however, that their oral administration had limitations such as, ‘low and erratic bioavailability’ due to acid and enzymatic degradation in the GIT as well as extensive first pass hepatic metabolism.

‘Most ARVs also have short half-life which necessitates frequent oral administration of doses, leading to systemic side effects as well as decrease in patients’ compliance with their ARV treatment. Alternative routes of drug administration such as the buccal, transdermal, rectal and vagina can improve the ARV treatment of HIV and AIDS.’

Her study thus investigated the potential of the buccal mucosal as an alternate route for the delivery of ARVs using didanosine (ddI) as a model drug.

Results from the study confirmed the potential of the buccal delivery of ddI in addition to identifying its permeability parameters across the buccal mucosa as well as permeability enhancement by both aloe vera gel (AVgel) and oleic acid (OA) derivatives as novel buccal permeation enhancers.

‘The study showed that both AVgel at 0.5 %w/v and the novel OA derivative, i.e. OA1ANa at 2 %w/w or lower concentrations, can be used as buccal permeation enhancers to develop and optimise novel buccal delivery systems for ddI to improve ARV therapy. The novel enhancers are recommended for selection as buccal permeation enhancers, to design and optimise ddI buccal delivery systems, and for application to other ARV drugs for improved therapy,’ Ojewole reported.

Her supervisor, Professor Thirumala Govender, who is the Discipline of Pharmaceutical Sciences’ Acting Academic Leader, said: ‘Despite many challenges, Elizabeth remained totally committed to overcoming them and pursued her PhD with passion and dedication. She is indeed a role model to all women and I am confident that she will grow and build a successful career at UKZN.’

Ojewole was born in Nigeria where she obtained a Bachelor of Pharmacy degree before pursuing her Masters in Clinical Pharmacy at Strathclyde University in the United Kingdom.

‘The training I received during my BPharm and Masters Degrees have prepared me to always work hard and with passion. Furthermore, my previous work experience outside South Africa as a Pharmacist, as well as in South African public and private hospitals, opened diverse opportunities for me in training and producing pharmacy graduates as health care professionals. My academic life at UKZN has been enriched by both international and local experiences in the pharmacy profession’.

‘Being able to inspire the final year BPharm students just before they go into the workforce as pharmacy graduates, teaching them to make a difference in the world of health care professionals and to effectively contribute to patient care drive my teaching and research each year at UKZN.’

She said her success was made possible by the support she received from her prestigious employer, UKZN which awarded her competitive research grants; ASPEN Pharmacare of South Africa; the National Research Foundation of South Africa and the Medical Research Council of South Africa.

She acknowledged Professor Sabiha Essack and Professor Moses Chimbari for their excellent motivation and support of her as an academic in the School and College of Health Sciences together with Professor Thirumala Govender for her excellent research supervision.

She said she was thankful to her late mom, family and friends for their love and prayers that supported her throughout her years of studies towards the PhD. Most of all, she praised the Lord God Almighty, for the strength and health given to her to complete the PhD.

Ojewole is a proud mother of two children – her daughter who graduated in 2012 at UKZN’s Nelson R Mandela School of Medicine, Dr Aderonke Oluwabunmi Ojewole and her son, Mr Adebayo Oluwadamilare Ojewole, who is a fifth-year Medical student at UKZN. ‘As you can tell, UKZN is indeed a University of choice for me and my children,’ she said.

Quoting Nelson Mandela, she said: ‘After climbing a great hill, one only finds that there are many more hills to climb’. She says she is ready to continue her journey as an academic and to successfully ‘climb the hills’ ahead.