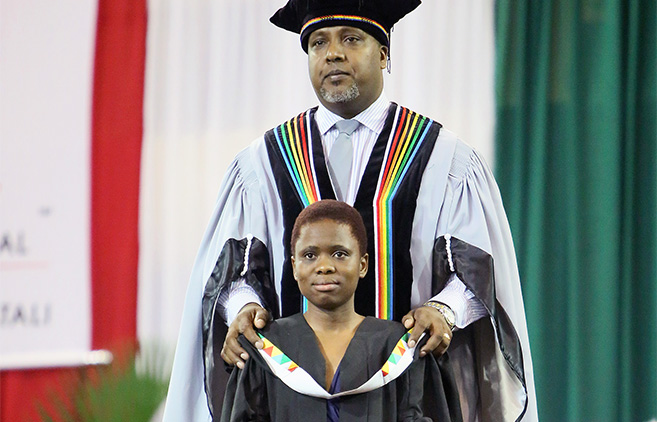 Nsele (27) of Mbazwana in northern KwaZulu-Natal received 17 merit certificates and Dean’s Commendations for academic excellence during her years at UKZN.

She was named Best Overall Final Year Optometry Student and scooped the Best Low Vision Clinician Award in addition to her group winning the Best Final Year Research Award at the 2014 Oath-Taking and Awards Ceremony at the School of Health Sciences Annual Research Day.

‘When I won three awards and especially the Best Overall Final Year I was ecstatic,’ said Nsele. ‘It is great to be awarded or just recognised for so many years of hard work, time and dedication.’

‘I have overcome many obstacles in my drive to succeed and had to sacrifice a lot of my time, effort and social life. My greatest support in my studies has been my family and my church.’

Nsele, who is short-sighted, said she chose to study optometry because she had always wanted to be a health care provider

‘I was fascinated on my first visit to the optometrist. I knew there and then that I wanted to be one and I chose UKZN because of its prestige and its position as a leading university producing quality health care practitioners.’

Nsele is currently employed by the Department of Health at Mosvold Hospital as an optometrist.

She said she was fortunate to be funded by Umthombo Youth Development Foundation to pursue her studies at UKZN.

Nsele, now a step closer to pursuing her masters, looks forward to starting a PhD in Optometry over the next few years.