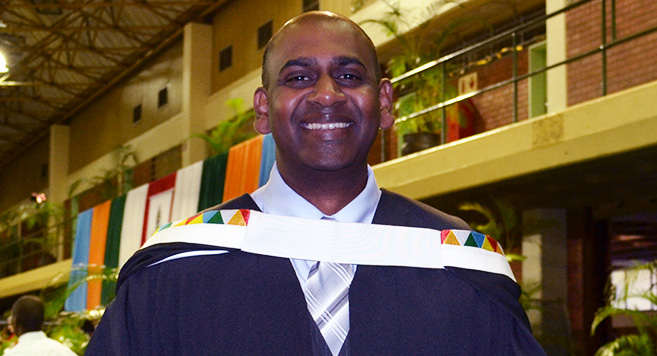 Chetty of Phoenix was part of a team of UKZN Health Sciences researchers who decided to give back to the community by conducting research that would benefit society’s significant but often forgotten population of senior citizens.

A biokineticist by profession, the enthusiastic technician in UKZN’s Physiotherapy discipline said his study aimed to determine the effects of a structured group exercise programme on the functional fitness of male and female people over the age of 60 who lived in five old age homes in the eThekwini Municipality region.

‘A quasi-experimental design was used to compare the effect of a 12-week group exercise programme on two groups of participants using pre-test post-test procedures,’ he explained.

Chetty said the prescribed intervention was guided by the recommendations outlined by the American College of Sports Medicine (ACSM) and American Heart Association (AHA). ‘It comprised warm-up, balance, endurance, resistance and cool-down components. Assessments of upper and lower body strength and flexibility, aerobic endurance, agility and balance were conducted before and after the intervention using the Senior Functional Fitness Test.’

Comparisons of baseline and post-intervention measures in the study showed greater improvements in the participants’ upper and lower body strength and flexibility as well as aerobic endurance capacity. However, no improvements were observed in participants’ agility and balance levels. Regarding training frequency, no significant difference in functional fitness measures was observed in both groups following the 12-week intervention programme.

The study concluded that 12 weeks of multifaceted group exercise training, at least twice a

week, could be used as an effective strategy to promote functional fitness in the elderly.

Chetty said: ‘Biokinetics is the application of exercise in rehabilitative treatment or performance, usually in a sport setting. I thought it would be beneficial to take this expertise and apply it to a geriatric population who are more prone to chronic diseases.’

‘My interest in working for the elderly comes from a love of family. I am part of a large tight-knit family and from a culture where the extended family is just as important as the nuclear family. Care for the elderly is also an area that will inevitably touch the lives of every individual at some point in their lives. I believe that it is an area of life that can provide us with much more life worth and fulfilment.’

Chetty warned that people often became totally engrossed with their own personal lives and forgot about the wealth of expertise and experience elderly folk had and how much could be learned from them.

He completed his Honours Degree in Biokinetics in 2011 after obtaining an undergraduate degree in Sport Science.

Chetty, who acknowledged the support he received from his family, friends and colleagues in the Physiotherapy discipline, said he wanted to contribute to the teaching and research ethos of the University by pursuing a PhD.

His motto is: Love, compassion and kindness.  ‘The rest is commentary.’