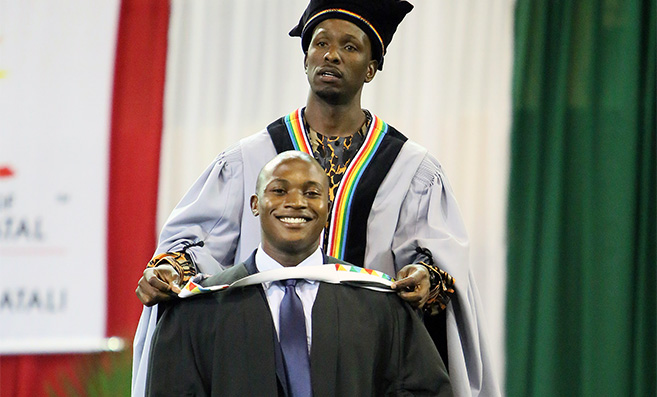 A Dental Therapy degree is the latest booty in the bag of international bodybuilding champion, Mr Joshua Nkosi, who graduated with the highest mark in his class for Restorative Dentistry.

Nkosi (24) made international headlines when he won a top title at the 2014 National Amateur Bodybuilders Association (NABBA) WFF Universe Competition in South Korea, repeating his winning performance at the competition in 2013.

He was named UKZN Sportsman of the Year in 2013 after winning top awards at the NABBA provincial and national competitions in South Africa.

Nkosi was placed second in the International Federation of Bodybuilding and Fitness (IFBB) East Coast Classics and Provincial Competitions in 2013, took second place in the IFBB KZN Novice Classic Competition of 2012 and finished in third position at the NABBA Universe Competition in the United Kingdom in 2010.

He said winning the most valued Dental award at UKZN’s Oath-Taking and Awards Ceremony was overwhelming and fulfilling as it highlighted his academic strengths as well.

‘My whole life has been very competitive hence working hard and smart has been a priority. As an athlete, discipline has been a core necessity for my success thus I channelled the same mentality into my academic life.’

From early childhood he encountered people with dental problems and this motivated his research on the causative factors leading him to pursue Dental Therapy at UKZN.

‘Being a student is a huge challenge if you want to be successful. In my case I also have sport where I need to excel and stay on top. Nutrition plays a huge role in the sport I do so I stick to a high protein diet despite the costs involved.’

‘Gym! Gym! Gym,’ is Nkosi’s motivation in life.  He says working out at the gym clears his mind and gives him the will power to sweat even harder for academic, spiritual and physical success.

Nkosi matriculated from KES High School in Johannesburg and is today working and studying part-time in pursuit of a masters degree.

‘Graduating is every student’s dream and I do feel that this is the beginning of greater things to come in my life, academically, socially and spiritually,’ he said.

‘Everything is possible in life if you believe in yourself, work hard towards your goals and pray hard for wisdom and guidance from God who I owe my success to.’