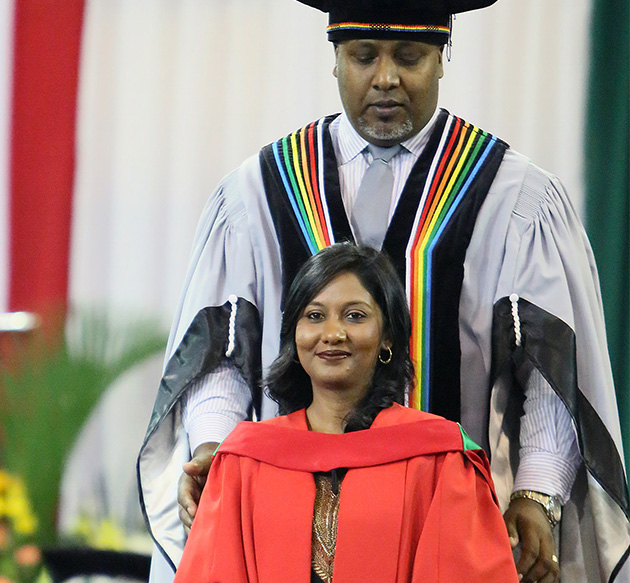 Dr Tanuja Gengiah graduates with a PhD at UKZN.

Because patients with the dual infection of HIV and TB were at a higher risk of death, Gengiah felt the safe and effective integration of drug treatment for the two diseases was essential to improve survival.

‘As a country we have made tremendous strides in increasing access to treatment over the last 10 years and now have the largest ARV rollout programme in the world. However, TB co-infection remains the leading cause of mortality in HIV patients and integration of care and treatment is a top priority and a major challenge for the public health system.’

Gengiah’s study found that rifampicin-based TB treatment unexpectedly increased concentrations of the first-line HIV drug efavirenz in the blood. This was the opposite of what was expected from previous studies in other populations.

‘Genetic differences that influence the functioning of important drug metabolizing enzymes were found, in part, to explain these findings. The concentration of rifampicin, a critical anti-TB drug, was found to be far below the recommended target range.’

The study recommended dosage reduction of efavirenz in African HIV/TB co-infected patients to minimise possible side effects and improve life long treatment sustainability. The rifampicin dose was recommended to be increased to limit TB treatment failures and the development of drug resistant TB.

The research provided evidence that a ‘one size fits all’ approach was not always suitable, and understanding population and racial differences in how drugs are handled was very important to optimise patient care.

The study was significant because such findings and recommendations will not only benefit co-infected patients but also provide public health benefits for South Africa.

‘I am very pleased and relieved to have completed the PhD,’ said Gengiah. ‘For an aspiring independent researcher a PhD is essential to have in order to successfully apply for grants and establish a credible standing in the research community.’

She said one of her interests as a research pharmacist was to better understand the clinical significance of HIV and TB drug interactions. The lack of data in African patients is what inspired her to conduct the doctoral research.

Gengiah holds two Masters degrees - a Masters in Clinical Pharmacology from the former University of Natal in 2003, and a Master of Science in Epidemiology from Columbia University, New York City in 2009.

Gengiah recently obtained an honorary appointment as a Research Fellow in the Discipline of Pharmaceutical Sciences at UKZN. She has published an impressive 22 peer-reviewed journal articles, about half of which she is the first author, during her time at the Centre for the AIDS Programme of Research in South Africa (CAPRISA).

She said she planned to continue working across all of the CAPRISA projects as the Head of the Pharmacy Department and would also be Co-Principal Investigator in an upcoming clinical trial at CAPRISA, assessing a new and highly potent antiretroviral drug for HIV prevention in young women.

Gengiah said her supervisor, Professor Julia Botha, and colleagues at CAPRISA, supported her throughout the PhD journey. ‘My mother and sister are my greatest supporters and my late father’s guidance is a constant inspiration.’