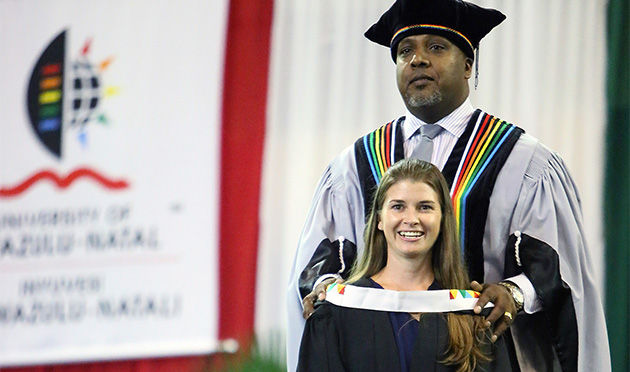 It was not an easy road but 26-year-old Robyn Knott persevered and graduated top of her class in the Bachelor of Nursing programme at UKZN.

Supported financially by her sister, Knott spent her vacations travelling to and from Zimbabwe to help support her father who was very ill.

‘I had always wanted to become a nurse since I was young,’ she said. A lover of hard work, her passion for nursing kept her intrigued about the different areas of specialisation.

Knott was awarded two UKZN scholarships covering portions of her tuition fees for academic merit and was overjoyed when she received a third covering all the fees.

‘I love playing sport but had to give it up as I studied and worked full time during my degree.’

Knott says she is from a family of academics, five of whom were educated at UKZN, and this motivated her to always stay on top of her game.

‘I feel all the hard work has paid off,’ she said after receiving the award for the Best Overall Final-Year Nursing Student at the 2014 Oath-Taking and Awards Ceremony.

Knott thanked her family, sister and boyfriend for all their support.

While she would love to eventually do a masters degree, specialise and find a job within the South African Department of Health trauma units, Knott is currently doing community service at King Edward VIII Hospital and enjoying every minute of it.