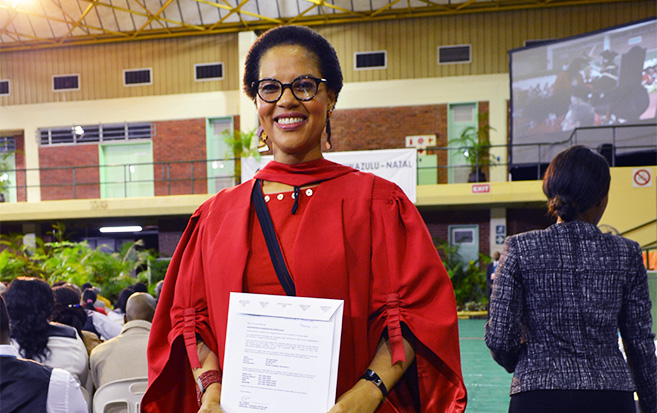 Dermatology HOD Dr Ncoza Dlova is capped with a PhD.

A study conducted by the Head of UKZN’s Dermatology Department, Dr Ncoza Dlova,  examines skin conditions common in Black patients and highlights the similarities to and differences from other skin conditions elsewhere in the world.

The PhD work emphasises  the importance of understanding Black skin and hair in recommending appropriate treatment.

Dlova’s study revealed that acne, eczemas, pigmentation disorders, infections and hair disorders are, in that order, the five most common skin disorders in black patients in Kwazulu-Natal.

The second aspect of the research was on the use of clays and plants for skin protection and rejuvenation.

Dlova said clays had long been used in southern Africa as photo-protectants by indigenous people.

‘Typically, two types of clay are used - one white in colour and the other red. In this work, the two clays were identified and characterised and their sun protection factor (SPF) values measured. The clays afford a low SPF but offer broad spectrum protection,’ said Dlova.

‘No cutaneous side effects from the use of these clays are known.  Clays play an important role for rural South African women in resource poor areas because they are cheap; easily accessible and culturally acceptable. Sunscreens are prohibitively expensive and unaffordable particularly for those in the developing world, thus further consideration should be given to the potential use of clays in sunscreen preparations.’

In another study on the use of indigenous plants for skin purposes, she said a range of compounds were isolated from the stem bark and fruit of the Garcinia Livingstonei. Bark extracts showed potential for development as natural depigmentation agents for skin disorders of pigmentation.

The third aspect of her work was skin lightener abuse among African and Indian women.

‘Results showed a poor understanding of the risks associated with the use of these products. Public education campaigns are therefore required to teach consumers about the risks and the importance of concomitant use of sunscreens with skin lightening products,’ Dlova said.

Analysis of about 10 popular skin-lightening creams sold over the counter and by street vendors showed that nearly half the products contained mercury as an active skin-lightening ingredient, although there was no indication of this compound on the packaging label.

There was great concern about the side-effects and easy availability of these products as well as poor policing and monitoring from the government.

According to Dlova, stronger regulations and restrictions need to be imposed on cosmetic shops and supermarkets. In addition, she suggested continuous education of consumers about side effects of these creams.

‘The South African Medicines Control Council and the South African National Consumer body need to be informed to investigate the unscrupulous distribution of these products,’ she said.

The fourth aspect of her research examined the perception of the risk of skin cancer, knowledge of skin cancer, and understanding of the importance and use of sunscreens among South Africans. The results showed that only half of Whites reported wearing sunscreen daily or most days.  Among Blacks and Indians, the number was substantially lower.

Less than 20% of Whites had ever checked their skin for suspicious moles. Most blacks were not aware they could get skin cancer, and only 10% were aware of skin cancers on acral sites and nails.

The fifth aspect of Dlova’s study researched hair loss among African and Indian women. Hair loss was found to be a common condition in KZN.

Dlova discovered that a form of permanent hair loss called frontal fibrosing alopecia, where women lose hair on the hairline, affects both groups and usually presents with pigmentation of the face as a heralding sign.

She also discovered a strong genetic link in a common scarring hair condition seen mainly in women of African descent - central centrifugal cicatricial alopecia (CCCA) – and postulated that it could be inherited in an autosomal dominant fashion, aggravated by hair-grooming practices such as use of chemical relaxers, weaves and traction-inducing hairstyles.

She found that hair loss could induce anxiety and reduce self-esteem among African women. Her recommendations were that health care practitioners be mindful of this and intervene appropriately to mitigate it.

She also emphasised the need for hairstylists in both the formal and informal sectors to be educated about hair disorders so that they could identify these early and advise clients to seek medical treatment. Picking up hair loss early was very important in avoiding the irreversible scarring which normally ensues.

Dlova  enjoys reading, cycling and travelling, and experiencing different cultures.   Born in Mtyolo, in the Mt Coke area close to King William’s Town in the Eastern Cape, Dlova was identified as one of the Woman Achievers and Leaders in Dermatology by the American Women’s Dermatology Society in 2015.

Medical students at UKZN have identified her as one of the best teachers in Dermatology. She was instrumental in establishing for the first time in 2014, the Dermatology Registrar forum of South Africa (DRASA), consisting of residents, academics and private dermatologists which was formed to create mentorship and networking opportunities, establish research collaboration and address topics that may not be covered in mainstream congresses.

She was previously named best Senior Researcher by UKZN's Faculty of Research. Her research on use of clays as sunscreen by rural black women was also named the most innovative and relevant research at an international ethnic skin and hair research meeting in Ghana.

As the first African dermatologist at UKZN, she says her first goal had been accomplished in that to date she has trained and mentored 20 dermatologists, many of whom continue to head and provide dermatology services in the public sector.

Her second mission is to mentor and advance scholarship in the Dermatology Department, producing more PhDs in years to come.

She was lauded by the International Society of Dermatology for spearheading an ambitious undertaking to restore and refurbish the skin clinic at King Edward VIII Hospital Durban, raising R450 000 to give a much-needed morale boost to staff and patients, with little disruption to patient care.