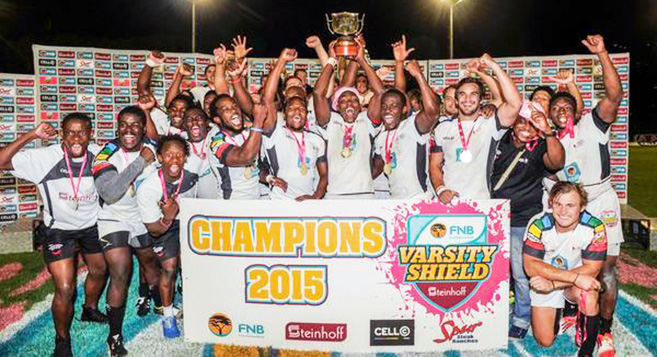 Impi landed the first blow through the captain Lwazi Ngcungama who scored a try under the poles and the conversion by kicker Spha Dube. A clever combination play from a line out between Matthew Mandioma and Chris De Beer saw UKZN increase the lead through De Beer’s try in the corner to 13-8 by the end of the first half.

The second half started off well for Impi with an outstanding performance by the back line that saw Flyer Innocent Radebe score and convert another try to take the team to 21- 8.

As the pressure mounted from the hosts, the team had not finished yet as they displayed some great attacking which saw Full Back replacement Alwayno Visagie score the final try for Impi which took UKZN to 29-16 with less than five minutes to the end of the game.

Wits tried to claw their way back and were rewarded with a try, and this ended the game with UKZN clinching their first ever Varsity Shield title.

A special word of gratitude from the UKZN Impi Team and coaching staff goes to all the supporters who made their way to Wits University to give the team the much needed boost. Special acknowledgement was sent to the student leaders who came down with the UKZN students to support the team.

‘On behalf of the UKZN Executive Management, I would like to take this opportunity to congratulate Ryan Strudwick and the boys for flying the UKZN flag high throughout this tournament and for making us proud by being crowned the 2015 FNB Varsity Shield Champions!

‘I further wish to thank the entire UKZN community, our alumni and friends of UKZN for the marvellous support given to our UKZN Impi team throughout the championship. To all the students and student leaders who came and sang their lungs out at all the games that they attended, your contributions—in terms of lifting the spirit of the team and ensuring this great achievement- are highly appreciated,’ said Student Services Executive Director, Dr Sibusiso Chalufu.