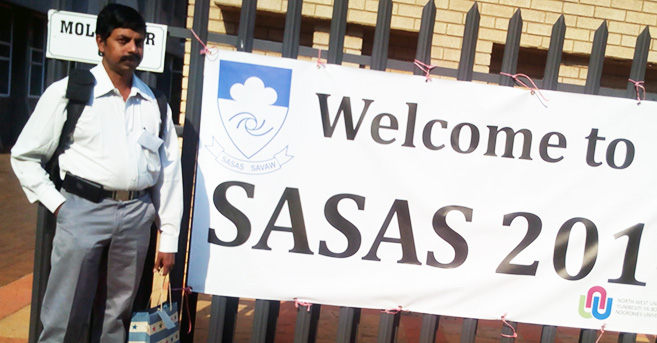 Professor Sivakumar Venkataraman has been at the forefront of a variety of efforts to popularise and advance teaching and research in the field of atmospheric science at UKZN, with his efforts resulting in several achievements for the Atmospheric Research Group in the School of Chemistry and Physics.

An enthusiastic and active member of the South African Society of Atmospheric Science (SASAS), Venkataraman was recently re-elected to its council of and once again holds the position of Vice-President for a two-year period.

Venkataraman has been an Executive Council member of SASAS since 2008 and was first elected to the office of Vice-President in 2012. The position requires Venkataraman to advise the society and benefit them through his work on their behalf.

Venkataraman has also introduced peer reviewed conference proceedings to the society and acted as editor for the last four years.  His role in the society’s conference planning is an important one and he was part of the process of introducing a one-day student training workshop first held in 2013.

The aim for his two-year tenure is to increase the number of new members entering the society and plan for joint ventures with other societies whose activities and interests align with those of the SASAS. Venkataraman looks forward to contributing towards the society reaching its goal of growing Atmospheric Science within the country and Southern Africa.

This corresponds closely with Venkataraman’s own goals in his research which aims to understand the structure and dynamics of the atmosphere in the context of global changes, particularly in the relatively poorly-documented regions of the tropical and austral regions of the southern hemisphere.

He focuses much of his research activity on atmospheric themes, including remote sensing techniques and atmospheric pollution measurements, assisted by the School’s state-of-the-art equipment which he manages, such as the portable 2D LIDAR and the CIMEL sun-photometer.

The 2D LIDAR, which was acquired last year, is a piece of state-of-the-art equipment which is used to send laser beams into the atmosphere and collect the backscattered photons through a telescope, optics, electronics and data acquisitions. This technical process provides high resolution vertical profiles of factors such as aerosols, clouds and water vapour and collects data for a height range of up to 40km.

It has recently been used for smoke detection in the atmosphere in coastal areas. This valuable data allows researchers to study the evolution of these factors and the growth of emission levels from industries and factories. The CIMEL sun-photometer apparatus, which collects publicly-available data on atmospheric aerosol conditions in KwaZulu-Natal, contributes to NASA’s online Aerosol Robotic Network (AERONET).

The LIDAR, one of only two in the country. is providing much-needed data collection for Venkataraman’s research group. It supports the existing honours degree modules on Atmospheric Physics, earlier third year Applied Physics courses, remote sensing techniques and has a PhD student using its data for work on Aerosol and Cloud studies. The equipment, managed by Venkataraman, has enabled the group to conduct bio-mass burning campaign measurements in collaboration with CSIR National Laser Centre (NLC) in Pretoria and the Université de la Réunion on the island of Réunion. Other collaborations include joint research work with a team in Algeria which is planning to develop a similar LIDAR system for important atmospheric research.

Venkataraman has been invited to give various talks on LIDAR research activities in Africa, with the most recent taking place at the Africa Laser Centre workshop in November last year. He has also been able to publish various book chapters on his LIDAR work with international publishers such as Wiley-VCH, InTech and Springer.

His research continues to yield positive results and his group is dedicated to training the next generation of Atmospheric Researchers. Currently it supports the research of six PhD students and four Masters students. Additionally, Venkataraman has begun planning a training workshop to take place in Durban on the 10 and 11 September this year on the topic of Laser and Optics in Atmospheric Remote Sensing.

The workshop is supported through the African Laser Centre and is taking place in recognition of the global International Year of Light (IYL) 2015. Attendance is free, specifically for South African postgraduate students who are interested in this research area.