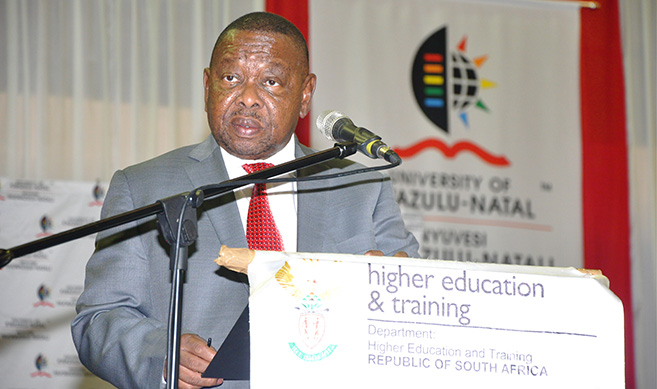 Minister of Higher Education and Training, Dr Blade Nzimande, addressed staff, students, members of University trade unions and the media on the Westville campus this week.

Nzimande said his visit had been arranged to allow him to give the UKZN community his ‘undivided attention and time to engage on matters you think are crucial for the development of this university’.

Nzimande focused on transformation and outlined the Department of Higher Education and Training’s contribution to the growth of UKZN. ‘From 2007, the department has allocated a total of R586 719 million towards infrastructure development at UKZN.

‘A number of significant building projects have already been completed, such as the UNITE building at Howard College and the Student Service Centre on the Westville campus which were opened in 2012,’ he said.

Redressing ‘historical inequalities’ was important and there was also a need to more effectively align the higher education sector with South Africa’s priorities for skills, knowledge and economic development, while at the same time operating as a global player in a very competitive environment.

Nzimande congratulated Dr Albert van Jaarsveld on his appointment as Vice-Chancellor and Principal and praised the University’s focus on Teaching and Learning. ‘I am pleased that UKZN, while being research orientated, is a balanced university that gives recognition to both research and teaching and learning.’

He encouraged the University to play a role in developing teachers and lecturers for Technical and Vocational Education and Training (TVET) and the Community College sector.

Students in the audience posed questions relating to financial aid, fee increases, security, and academia, among others.

Nzimande assured members of the Progressive Youth Alliance, who asked several questions, that he would make himself available to meet them to further discuss their concerns.

The Minister also had meetings with the University Council, senior management, the Central SRC, and representatives of staff and trade unions.

Van Jaarsveld thanked the Minister for meeting with the University community and facilitating the exchange of ideas.