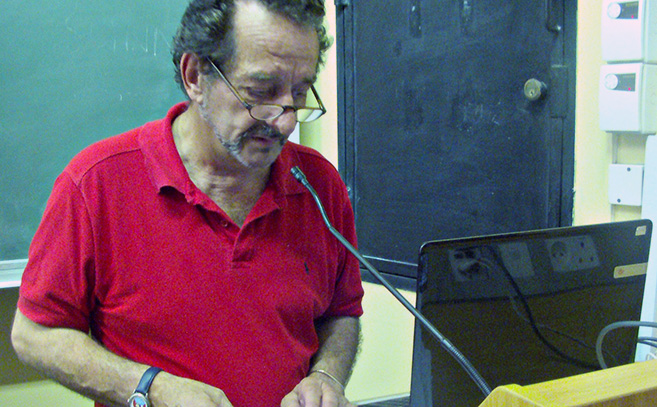 Ethics and Conflict Resolution in Journalism Debated at Public Seminar

The Media and Cultural Studies (MCS) Programme in UKZN’s School of Arts hosted their first public seminar in collaboration with Alliance Française de Durban (AFD) with the focus on Ethics and Conflict Resolution in Journalism.

The seminar was presented by French international Reporter and Correspondent, Mr Patrice Vanoni, who shared some of his reporting experiences and lessons learned in war-torn countries.

Vanoni spoke about reporting on rebel groups in Liberia and also about racial issues faced by a foreign correspondent in a war zone.

A question from a member of the audience was: ‘How do French affiliated news agencies or news reporters remain objective when reporting African news?’

Vanoni’s response was that in Liberia he was not concerned (at the time) with how the story was portrayed but was driven by capturing images on events that took place.

Vanoni spoke about working as an international Reporter and Correspondent in a variety of countries, particularly in war-zones around Africa in the 1980s.  He also worked in India for four years, and later spent more than 10 years in the United States.

He has experience in a wide range of media sectors with a lot of his work as a television reporter being shown on France’s biggest television channel, TF1.

He spoke about how television footage captured from helicopters could be viewed as unethical because of its sometimes graphic nature, especially when incidents end with individuals killing themselves or being killed by police.

The seminar, coordinated by Media Lecturer Ms Luthando Ngema, also featured yet another Lecturer at MCS, Mrs Anusha Sewchurran, speaking about laying the theoretical foundations around issues of ethics in journalism in a South African context.

Her brief talk offered insight into the challenges war journalists face in their work. ‘The psychological effect of what war journalists go through is something psychiatrists feel is not touched upon. War journalists experience a lifetime of post-war trauma, just like combat soldiers,’ said Sewchurran.

The event was a proud moment for the Department of Media and Cultural Studies (MCS) which initiated the project to cultivate the discipline and to debate issues around society.

The aim was also to show how Media and Cultural Studies perceive and embrace issues pertinent to the growth of development and economies, and to discuss the reduction of poverty and racism, ultimately enhancing a global approach to media careers for local benefits.

Head of the MCS department, Professor Jean-Phillippe Wade, said, ‘We are rebuilding the department by moving away from a heavy focus on theory to trying to have a more practical engagement in the media field.’

As part of the project, the department will host more visits from individuals in Media, Culture and Communication industries to present seminars open to the public.