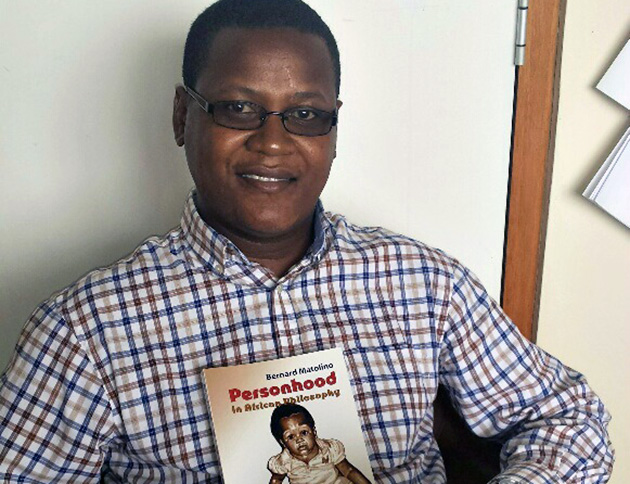 Said Matolino: ‘I chose to write this book primarily because this is an area I have been researching in for the last nine years. My PhD was on how the notion of personhood shaped the first statements of African political philosophy in the form of what was seen as a particularised version of African communitarianism. My interest then was to assess to what extent the philosophical discourses of personal identity, or notions of the self, or personhood, had buttressed the adoption of a certain polity that was presented as authentically African.

‘I then discovered that the philosophical view of personhood was hotly contested and was in need of independent investigation so I sought to primarily understand what the differences, similarities, and philosophical insights and implications of the various interlocutors were,’ said Matolino.

‘Having studied how Western philosophers had almost solved the issue of personhood (with differences known and accepted), I wondered if through, purely philosophical investigation, it could be possible to articulate a philosophically defensible position without relying on exaggerations about African identity. In a word, like many a philosopher before, I was driven by philosophical curiosity.’

Asked about his own personal highlights associated with the book, Matolino said: ‘The highlight of the book is that it is possibly the only monograph ever written that is wholly dedicated to the concept of person in African philosophy. In literature one does find lots of piecemeal writings on the subject but there is none that is as comprehensive as this publication. I have taken great care in gathering distinct, contradictory and at times irreconcilable treatments of this notion and have brought them together in one publication.’

This notion is highly contested, between what he believes are two major strands; communitarianism and metaphysics. The communitarian view, in its varied appearances, bases metaphysics and epistemology in the enduring reality and priority of the community over the individual. This view has been criticised for its failure to accommodate individual rights and realities in social and political structures.

By metaphysics of identity Matolino refers to the idea that the constitutive elements of a person are essentially non-social and should be taken seriously in what he calls the governance of the self. Though he does not seek to argue for an entirely individualistic conception of the self; he finds it illuminating that this self should be construed as a communal entity in ways that take the possession of individual attributes seriously.

Matolino says although this position might appear insignificant, its justification and necessity lie in the need to counter the hyperbolic valorisation of communal reality at the expense of other important things that constitute “the person”.

The book is fairly technical hence it is targeted at people who are professionally trained in philosophy, have a highly developed interest in the subject matter, or are receiving training in philosophy. According to Matolino, the issues treated in the book are of a great philosophical significance and have been fiercely contested by philosophers on the continent.

It will also be available on Amazon Kindle next year.