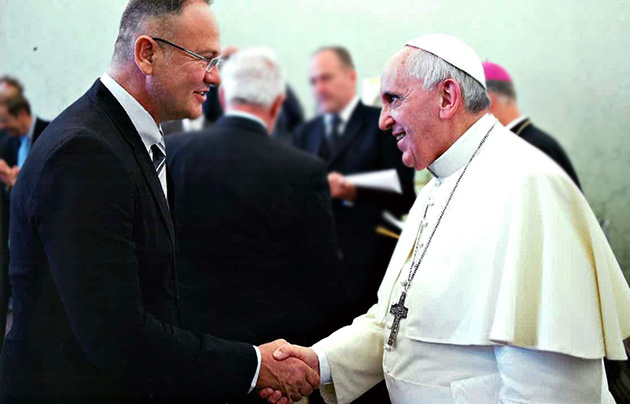 UKZN’s Professor Robert Peacock with Pope Francis at a meeting in Vatican City.

Academic Leader of the Criminology and Forensic Studies Cluster in the College of Humanities, Professor Robert Peacock, was among a select group who met Pope Francis in the Vatican City to discuss crime and the pursuit of social justice.

Peacock, who is Vice-President of the World Society of Victimology, was invited to the private audience as a representative from the global big five international criminal justice associations.

Peacock said the Pope also spoke out against political complicity, where power was concentrated in one source and referred disdainfully to the mentality of typical corrupt people, whom he described as ‘conceited, unable to accept criticism, and prone to insult and even to persecute those who disagree with them’.

‘Pope Francis called for abolition of the death penalty as well as life imprisonment, and denounced “penal populism” that promises to solve society’s problems by punishing crime through a primitive tendency to offer up “sacrificial victims”, instead of pursuing social justice. The Vatican recently removed life imprisonment from its own penal code.’

In light of this, Peacock and the World Society of Victimology made a submission to the Pope referring to the problems regarding sexual abuse within Catholic Church institutions and saluted the Pope for publicly condemning wrongs committed in the past decades.

A case was also presented for working together to improve outcomes for victims in the context of the World Society of Victimology’s activities, offering specialist expertise to the Church in order to frame adequate redress schemes which could play a meaningful role in finally closing this ‘sad chapter in our history’.