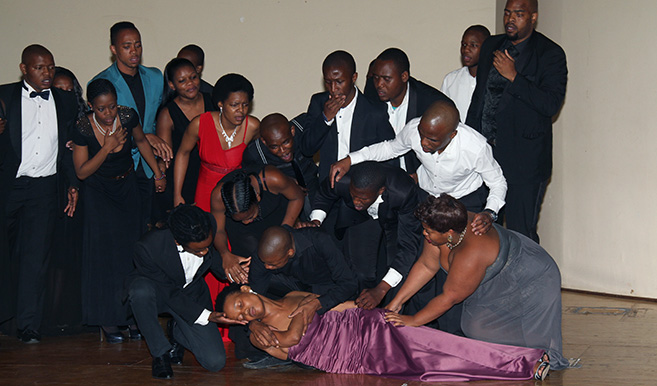 The outstanding depth of talent among UKZN Music students was revealed during the Eleventh Festival of Italian Opera held at the Howard College Theatre in celebration of the annual International Week of the Italian Language.

UKZN’s Italian Studies and Music Disciplines collaborated in the organisation of the Festival.

The necessity for the close relationship between the two disciplines was explained by Italian Lecturer and host for the evening, Ms Federica Bellusci, who said students of music needed to study Italian to assist them with their pronunciation.

Participants in the competition were judged on both their singing ability and their grasp of Italian by a three-man panel consisting of Professor David Smith, Mr Richard Salmon and Mr Tony Amatulli.

The judges were unanimous in awarding first place to tenor, Mr Njabulo Shozi, for his rendition of Mattinata by Leoncavallo; while baritones Senzo Funeka and Sivuyile Matyana received a special mention.

Senior OSCA students - including Scelo Gabela, Eunice Mokoena and Lindokuhle Ngcobo  - were featured in the second half of the evening,  followed by a rousing massed rendition of Ogni Suo Aver Tal Femmina from Verdi’s La Traviata, in which all OSCA students participated.

During her opening remarks, Dean and Head of the School of Engineering, Professor Cristina Trois, who hails from the Italian island of Sardinia, stressed the importance of keeping both Italian and music alive and well at UKZN.

She thanked the voice teachers, accompanists and conductors for their hard work behind the scenes to ensure that the evening was a success; and complimented the students for having the courage to step on stage and share their musical talent.