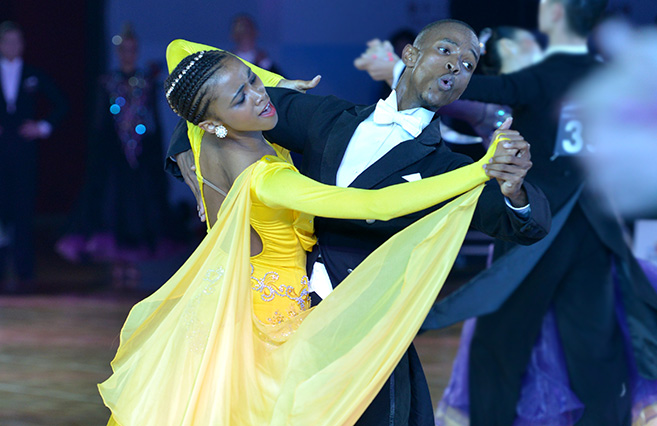 They were the only entrants from Africa and competed against some of the best dancers in the world.

Managed by Academic Leader in the Discipline of Curriculum Studies and Education Technology, Dr Simon Bhekimuzi Khoza, the couple finished 26th out of 39 entries.

Khoza said: ‘The UKZN duo, who have danced together as partners for just over a year, did extremely well to be ranked number 26 on a world championship scale.  It is testament to the hard work, long hours, dedication, sacrifice and passion they put into each and every performance.  They won the title of most popular couple at the championship.’

Dolwana has been dancing and competing for 10 years and Khoza for 12 years. The couple won the KwaZulu-Natal World Trial, the Ilembe Championship, Gauteng World Trials, the eThekwini Championship, Samba by the Sea and the South African Championship Title, all as a new dance couple.

Dolwana and Khoza said funding for dance was limited and sometimes non-existent but they were hopeful that would change in time and they wanted to be agents for that change.

At the championship, the students had to perform five dances: waltz, tango, slow foxtrot, quickstep and Viennese Waltz. ‘It was such a great experience to see and compete against the best in the world and to share the same floor as them.

‘It also proved to be both informative and a great networking opportunity for us, being the only couple representing Africa. We made connections with other dancers and hopefully we can build on that connection and give South African ballroom dancing international recognition,’ said Dolwana.

Both students have managed to strike that perfect balance between studying and dance. ‘We have been dancing for years so we understand how to juggle the many aspects of our lives. And because we love what we do, it drives us to perfect all routines. Dancing teaches you to have discipline and to work hard and this filters through to your studies,’ said Khoza.

Despite not bringing home a world championship title, the students are still training and putting in the long hours as they plan to defend their South African Championship title in Cape Town next month.

They also revealed that they’d like to cultivate future professional ballroom dancers from UKZN and to give students the opportunity to take up the sport and to compete professionally.

For further information about joining the UKZN Ballroom Dancing Team, contact: Dolwana at tinadolwana@gmail.com; or Khoza at thabolulamak@gmail.com, or Dr Simon Khoza at khozas@ukzn.ac.za