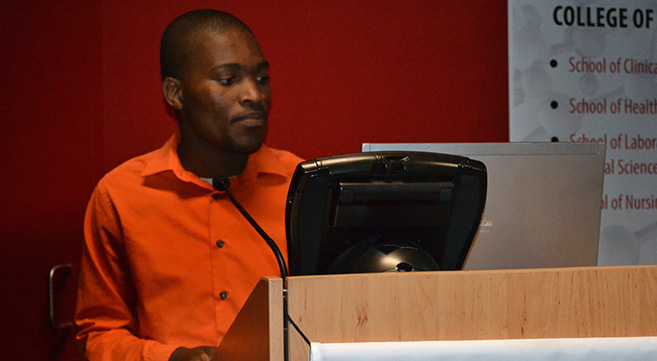 Luvuno says diabetes concerns health systems worldwide with many people in developing countries not being able to afford appropriate medicines to manage the chronic disease.

‘My study is trying to find affordable and easily accessible diabetes management treatments by looking at plant extracts that are readily available to all,’ he said.

The study titled: “The Effects of Plant Derived Triterpenes on Plasma Ghrelin Concentrations in Streptozotocin-Induced Diabetic Rats”, aims to show how this hormone regulates hunger in diabetes patients.

Said Luvuno: ‘The study is about investigating the effects of plant-derived compounds - oleanolic and maslinic acids - on ghrelin secretion in diabetic induced rats.’

The study is part of a larger one which seeks to find alternative treatment/s for management of diabetes mellitus.

‘Disadvantages of conventional drugs such as insulin, metformin and acarbose include high cost; side-effects and low availability in developing countries. These reasons have therefore motivated the research focus to shift to phytomedicine which promises to be a cheaper, easily accessible and side effect-free alternative treatment for diabetes,’ said Luvuno.

‘Research from our laboratory has demonstrated that OA and MA inhibit carbohydrates hydrolysis and glucose transport. The resulting reduction in glucose absorption shows reduced postprandial hyperglycaemia.’

He said his study was directed at food intake reduction which perpetuates increased postprandial hyperglycaemia in diabetes mellitus.

‘Accordingly we investigated the effects of OA and MA on ghrelin secretion - as ghrelin is a hormone particularly responsible for appetite regulation in the brain - in streptozotocin-induced diabetic rats.’

He said this was an established approach to managing diabetes but using novel compounds.

‘We concluded that the anti-hyperglycaemic properties of OA and MA arise, in part, through reductions in food intake mediated by decrease in plasma ghrelin concentrations as well as gastrointestinal ghrelin expression. Therefore these plant-derived triterpenes can be used as alternative therapy in the management of diabetes mellitus. In addition to the scientific findings, I learned a lot on how scientific research is carried out i.e. from taking care of the animals to running some of the tests in the laboratory. I have to say that it has fuelled my scientific curiosity.’

The study recommendations included that the effects of OA and MA treatment in STZ-induced diabetic rats on plasma leptin concentrations should be investigated as part of finding the involvement of leptin on the reduction of food intake.

According to Luvuno, his study was a first of its kind and would not have happened without the help of supervisor: Professor CT Musabayane, co-supervisor: Dr HP Mbongwa and mentor: Mr A Khathi

‘I’m grateful for their support and contributions,’ he said.

Luvuno is currently completing his Honours study and plans to do his Masters degree next year.