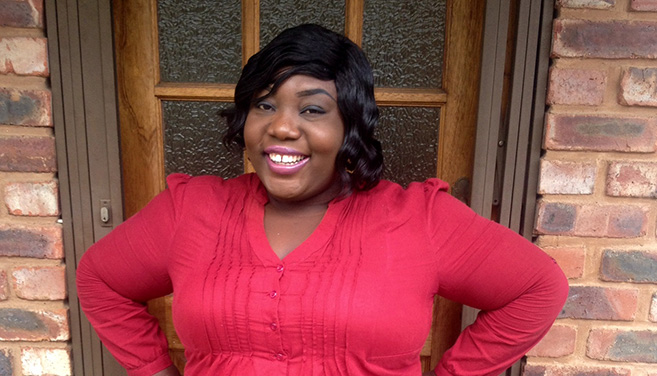 Agbaje, who is completing her Masters degree in Mathematics under the supervision of Professor Sandile Motsa, presented on a chapter of her Master’s dissertation, namely, the Chebyshev spectral perturbation approach for unsteady heat and mass transfer by MHD mixed convection flow over an impulsively stretched vertical surface with chemical reaction effect.

She said she was pleasantly surprised by the enthusiastic response she received for her presentation at SAMS. Delegates were intrigued by her topic and impressed at the sincerity and confidence which she displayed in the pursuit of her work.

Attending the Congress, said Agbaje, allowed her the opportunity to meet mathematicians working in numerous aspects of the discipline and enabled her to learn from others, something which she believes will greatly impact her future research.

Despite her current success, Agbaje admits that mathematics was actually her second choice, and a subject she found challenging during her undergraduate years at the Federal University of Technology Akure (FUTA) in Nigeria. During the course of her studies, however, Agbaje’s interest in mathematics began to grow as she realised its vital importance in relation to all other subjects and saw its applications in real life.

‘I see mathematics as the mother of all subjects,’ said Agbaje. ‘In addition, mathematics is an important contributor to society because there are lot of elements of Mathematics, most especially in my area, applied mathematics, which can be used everywhere in daily life. For example, the chemical effect I considered in this particular SAMS presentation is applicable in crude-oil production, cooling and crystallisation of chemical materials, grain separation in farming, uranium production, drying technology and much more.’

Agbaje, who arrived at UKZN in 2013 to begin her Master’s degree, said the research facilities and infrastructure the University provided to assist students with the completion of their research had made all the difference.

She hopes to continue her research to the level of a PhD in applied mathematics and said she could see herself becoming a professor in the subject.

Agbaje said major factors in her success were her strong faith in God and the financial support and encouragement of her parents. She also thanked her fiancé, sisters and cousin for their support, understanding and encouragement during the challenging task of completing her dissertation.

She said the support of her supervisor, Professor Motsa, proved invaluable in her success. ‘I will always be indebted to him for introducing me to new numerical methods of solving complex nonlinear boundary value problems and thereby inspiring my interest in the area of Applied Mathematics and shaping my future,’ said Agbaje.

Dean and Head of School, Professor Kesh Govinder, said Agbaje and Motsa had ensured the continuation of UKZN’s long standing tradition of winning awards at SAMS!