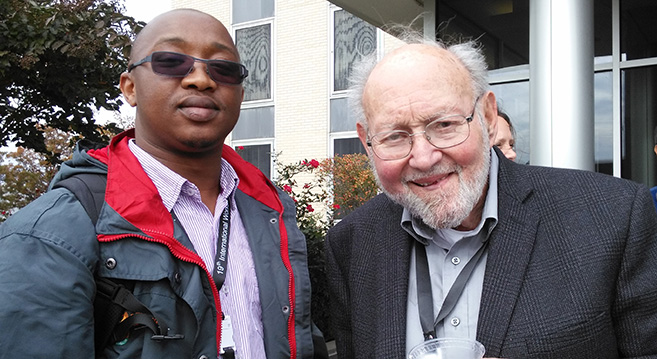 The career of UKZN doctoral candidate, Mr Sphumelele Ndlovu, who is attached to the Space Geodesy Programme at the Hartebeesthoek Radio Astronomy Observatory (HartRAO), has flourished in the past few years.

Ndlovu recently returned from the International Laser Ranging Workshop in Washington in the United States, where he presented his work on the development of a mathematical tool which, using C++ programming language, enables optimal efficiency and signal path parameter estimation of a Lunar Laser Ranger (LLR) system currently under development at HartRAO.

The LLR results agreed with data from northern hemisphere stations, leading to invitations for Ndlovu to visit the other stations and verify his findings as well as look at implementing the software in their systems.

Ndlovu’s presentation emphasised HartRAO’s ideal positioning and sound data which can play a key role in improving the ranging accuracy to a sub-centimetre level, adding to the current effort to determine highly accurate earth-moon distances for various scientific purposes.

Ndlovu faced challenges on his path to success in the scientific arena as his high school education was all in isiZulu.

Subjects with extensive notes, therefore, proved less appealing and more difficult for Ndlovu, which is what initially drew him to the subjects of Mathematics and Physical Science, where the provision of formulae allowed him to develop his problem-solving skills.

His good performance in mathematics and science led Ndlovu to UKZN, however, attending a university with English as the main language of instruction was an obstacle, which is where the University’s Science Foundation Programme (SFP) came in. The SFP provided Ndlovu with a one-year access programme where he was taught foundational, pre-university level modules in scientific subjects, providing him with a solid grounding in science literacy, life skills and study skills which prepared him to take on a Bachelor of Science degree.

‘The skills I learned during the programme were invaluable,’ said Ndlovu. ‘The SFP taught me to always look at challenges as an opportunity.  I also learned to never put off what can be done today until tomorrow.  We used to get weekly assignments and we would complain about not having enough time, to which our lecturers would laugh and say ‘make time’ to teach us the importance of time management.

‘The SFP is a good stepping stone between high school and university, especially for those of us coming from disadvantaged schools,’ said Ndlovu.

UKZN’s Pietermaritzburg campus was the ideal place for Ndlovu to pursue his dreams, and he says that the availability of the lecturers to assist students and the study environment made his work easier. He enjoyed the student social life and participated in campus societies as well as acting as an Augmented Physics Tutor enabling him to give back to young people in a similar situation to his.

Ndlovu said Dr Naven Chetty of the School of Chemistry and Physics played the greatest role in his academic career, being constantly available to assist in honours and masters research.

‘I didn’t only learn Physics from Dr Chetty but also learnt to read and write for scientific journals, and have since published a paper under his supervision, with a second one being accepted for publication recently. He fuelled my interest in science and saw potential in me, encouraging me to study further.’

Ndlovu, who now works in the research area of geodesy, a specialised branch of earth sciences that deals with the measurement and representation of the Earth in a three-dimensional time-varying space, is continuing to pursue his academic goals by studying for a PhD through UKZN.

Ndlovu’s position at HartRAO allows him to continue with his doctoral studies under the supervision of Professor Ludwig Combrinck. He is now involved with a project in the field of geodesy dealing with the measurement of the Earth-Moon distance - it is the only one of its kind in the southern hemisphere.