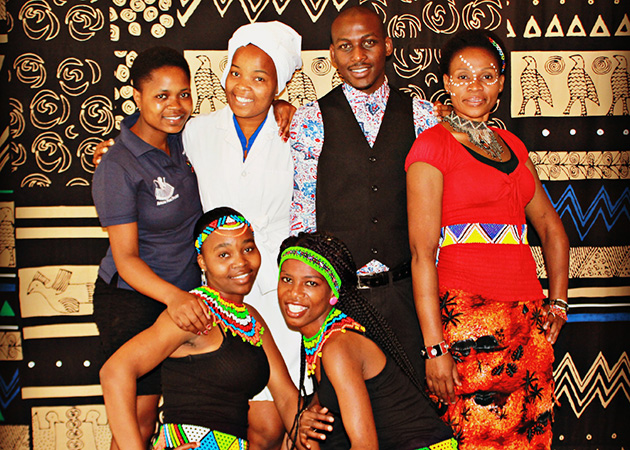 African Music and Dance students who performed at the Howard College Theatre.

The Music Discipline within the School of Arts recently held its final year public exit recitals in which African Music and Dance (AMD) students went on stage at the Howard College Theatre for their final 45-minute solo performances.

The performances incorporated all the students had learned from the programme with their solo act being judged and assessed by a panel of judges who examined their style, creativity, skill and technique.

The students described the experience as ‘nerve-wrecking yet fun’ and expressed their gratitude for their Lecturer, Dr Patricia Opondo, saying they had learned so much from her about performing and staying ‘true to yourself and being proud of your culture’.

Speaking about the public exit recitals, student Ms Nontobeko Sibiya said all the performances went well and according to plan. ‘Although we knew we were being marked on our recital, it didn’t stop us from getting up on that stage and giving it everything we had. It was scary at first but then once you get into your performance, nothing else matters other than putting on a great show. And the audience seemed to love it.’

Colleague Ms Nozuko Nguqu emphasised that a lot of hard work, long hours and sacrifices went into the solo recital. ‘Being natural-born performers and also having worked on previous productions helped us to become better performers and all that we had learnt culminated in this final act. We practised long and hard and are all proud of what we achieved.’

The students are confident that they performed well and were eager to take the next step of getting into the performing arts industry and pursuing postgraduate study.

Student Ms Neliswa Dlamini said most of them loved African Music and Dance and were keen to turn their passion for the arts into a career.

‘We hope to inspire others to follow their dreams and to go back to our communities and help nurture and develop the talent of the youth and to help contribute to keeping the arts industry alive and thriving,’ said Dlamini.

They advised future final year students to rehearse, plan in advance, never give up and to be committed to executing stellar performances.

They hoped their vision of a world being healed, educated, developed and entertained through live music became a reality.