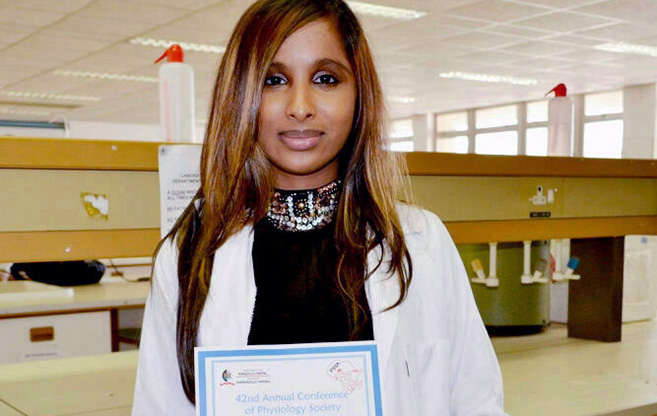 A UKZN Masters student in Physiology (Neuroscience) won the Emerging Young Scientist Award for an Honours project she presented at this year’s Physiology Society of South Africa Conference.

Its aim was to provide further insight into the fundamental effects of Tat – the multifunctional protein that contributes to several pathological symptoms of HIV-1 infection as well as playing a critical role in virus replication – on the central nervous system and to explore it as a possible aetiological factor in the development of the HIV-associated neurocognitive disorder.

Harricharan said: ‘We specifically focused on the histopathological consequences of Tat injected directly into the dorsal hippocampus of rats. The effects of the Tat injection on the cognitive function of the animals were also investigated.’

The study indicated that direct injection of Tat protein into the hippocampus of rats may lead to learning and memory deficits in these animals. ‘This impairment in cognitive behaviour was associated with significant abnormalities in the microarchitecture of the hippocampus. Although several recent studies have shown Tat protein to be a promising candidate for a vaccine in HIV infection, we were interested in examining its adverse effects,’ said Harricharan.

Implications from the study may positively impact the fields of immunology and neuroscience, say the researchers. ‘In the field of neuroscience, the escalating volume of research being conducted generates novel findings. These discoveries offer promising new targets for therapeutic interventions and possibly a way to reduce the damage caused by HIV-associated neurocognitive disorders.’

Harricharan (23) said winning the prizes for a project she conducted at Honours level was really special.

‘It’s amazing to try and understand how the brain works. It’s such a complex and mysterious organ. Even making a small discovery about how it works, is a huge stride toward the advancement of neuroscience.’

Her on-going masters research is in close lineage with the honours project and now includes stress as a new paradigm to the model.

Harricharan said from a young age she always wanted to do medical work, especially related to the brain. She plans to stay in academia, pursue a PhD, promoting neuroscience and good mental health even further in South Africa.

‘I love the fact that being in academia challenges you every day to be the best at what you do and can achieve.’

She believes many South Africans live with neurological diseases without being diagnosed, making neuroscience a fertile field for young researchers who want to make a difference by contributing to the development of neuroscience in South Africa.