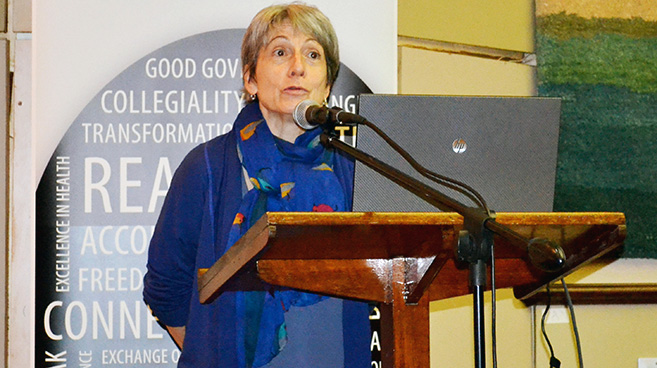 The remarkable achievements of the University of Ottawa-Canada’s Professor Rachel Thibeault in the field of Occupational Therapy were outlined during a public lecture she delivered at UKZN during a four-day visit.

Staff, students and a host of health professionals said they were inspired by the sterling contribution Thibeaut had made pursing her passion in the interrelated fields of occupational therapy, psychology and community development globally.

Occupational Therapy uses human occupation as an intervention to promote health and well-being. The primary goal of specialists in the field is to enable people to participate independently in their activities of daily living.

As an expert in the field, Thibeault said she was equally inspired to learn about the work done by UKZN Occupational Therapists in improving the quality of life for KwaZulu-Natal communities.

She specialises in community-based rehabilitation, psychosocial care, and issues of meaning, resilience and social justice in health care. Her research focuses mainly on community-driven models of rehabilitation services in hard-to-access settings such as areas affected by HIV and AIDS, former or current war zones, and leprosy communities.

In 2013 Thibeault was awarded the title of Officer of the Order of Canada for expanding the boundaries of occupational therapy.

Thibeault’s participatory action research has also taken her to the High Arctic, South East Asia, Central America, Europe, Africa and the Middle East. She said she preferred to work from a participative perspective that fostered community decision-making at all levels and promoted approaches which built on the principles of sustainable livelihoods, service integration and social inclusion.

Thibeault reflected on this during her public lecture titled: "Occupational Justice and Community Development: Key Milestones and Considerations".

She said what she learned the most was not in the classroom but out working in communities, and through patients and their wisdom. The work of an occupational therapist had much greater impact if those involved were sensitive to culture and took time to listen and engage with members of the community before devising a strategy for intervention. She said for her ‘the simple act of listening, shaped the whole sequence of events to follow’.

She shared tools, tips and principles to help guide occupational therapists to successful rehabilitation of patients even in adverse situations.

During the four-day visit, Thibeault conducted two workshops, a panel discussion and the public lecture which were all well received. She also went out to the Occupational Therapy discipline’s community learning sites where she was hosted by students in Kwadebeka and Mariannridge. Thibeault found that the students were accomplished clinicians, advocates and community activists.

Proudly named a member of UKZN’s OT family, it is envisaged that Thibeault will return in June 2015 when she will build capacity around Participatory Action Research and relevant tools for this type of qualitative inquiry.