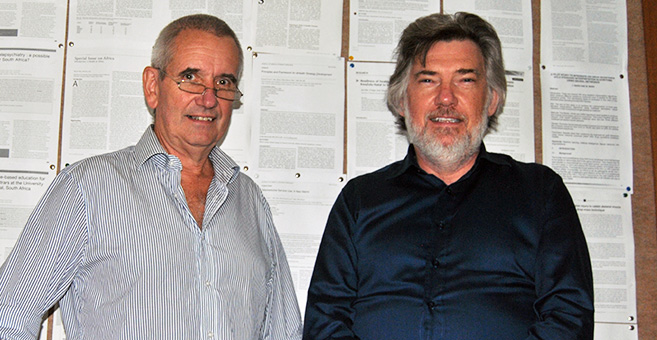 UKZN Professors Named as Leaders in Telemedicine in Africa

UKZN’s Head of the Discipline of TeleHealth, Professor Maurice Mars, and Professor Richard Scott have been named in an Australian study as the leading publishers in the field of telemedicine in Africa.

The study by Dr Nigel Armfield titled: "Telemedicine – A Bibliometric and Content Analysis of 17 932 Publication Records", was recently published in the International Journal of Medical Informatics (2014;83(10):715-725).

The study aimed to provide an up-to-date contemporary bibliometric view of the telemedicine and telehealth literature, and a longitudinal analysis of changes in content themes. The study analysed 17 932 records in the PubMed database, published in 2 523 journals. In the cumulative literature, 3 152 articles (18%) were published in specialist telemedicine journals while most articles (14 780; 82%) were published in mainstream clinical journals. The study ranked Scott at number 16 on the Top 30 author list, ranked by total number of publications (all-time) with 37 articles, and Mars at number 26 with 27 articles.

Mars was number six on the Author list when ranked by total number of publications over the five years 2009–2013 (excluding editorials), with 21 articles and is the leading publisher from the developing world, while Scott ranked at 14 with 13 articles. Mars, who has over 185 publications, pointed out that this study only reported papers in the PubMed database and that as telemedicine was a relatively new field there were several journals that were not included as yet in this database.

Mars said: ‘I try to work wherever I am - whether on long haul flights where I always work on a paper or a student’s thesis or waiting to pick up my wife. Whatever I do in e-Health has to be linked to a research project and the results need to be published so that others can learn from our experiences and better understand our circumstances in Africa.’

Armfield’s study took a new bibliometric approach to describing the telemedicine related literature, combining information about authors, outlets and content. It provided an overview of publication trends over time, examining topics during the early adoption of telemedicine and comparing them with recent published reports.

According to Armfield, this gave valuable insight into the maturity, scope, and perception of telemedicine.  ‘Our study has shown that telemedicine has evolved from a heavily technical domain to one with a more patient-centric and clinical focus.’

Mars has been the recipient of an NIH Fogarty International Training Grant in Medical Informatics for 15 years and his discipline has over 100 postgraduate students in nine African countries who participate in lectures and seminars in their home countries by videoconference on their computers, tablet PCs or smart phones.

He is married to a Physiotherapist and has three daughters.

Scott has been involved in e-Health since 1996 and has published 196 papers in the field over the years. He trained at the Mayo Graduate School of Medicine in Clinical Chemistry and Clinical and Forensic Toxicology, which he practised, researched, and published in before seeing the fundamental value and importance of e-Health and shifting focus. He is a determined and disciplined individual who is motivated by his desire to get his understanding into the literature so that people can debate the work he has produced.

A Canadian, Scott is married with three children.

He thanked UKZN for allowing him the opportunity to work with Mars: ‘It is indeed a great opportunity for collaboration, and it has also afforded me time to see and explore some of the country and culture of South Africa.’

Scott, a Global e-Health expert, is currently a Professor at UKZN, and CEO of NT Consulting – Global e-Health Inc (www.ntcehc.ca). He is also Director of the Office of Global e-Health and Strategy, and an Adjunct Professor in the Departments of Community Health Sciences and Family Medicine, at the University of Calgary.

Scott has developed novel but important areas of research in Environmental e-Health and Disaster e-Health, but focuses his interests on examining the role of e-health in the globalisation of healthcare.

He promotes the application of "culturally sensitive and technologically appropriate" e-health solutions, and has pursued, or is pursuing, collaborative research, capacity building, and implementation activities with colleagues in European, Asian, Australasian, African, and Latin American and Caribbean (LAC) countries.