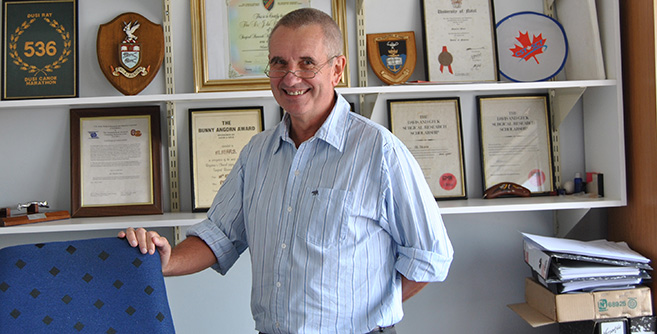 Research Finds Informed Consent an Obstacle for mHealth in KZN

Habits and practices of mobile phone use by patients in KwaZulu-Natal as well as their understanding of informed consent for a telemedicine consultation, were the subjects of research by UKZN’s Head of the Discipline of TeleHealth, Professor Maurice Mars, and PhD student, Ms Caron Jack.

mHeath is the use of mobile health communication such as mobile phones, tablet PCs and personal digital assistants (PDA) for the provision of health services.

The studies by Mars and Jack were titled: "Ethical Considerations of Mobile Phone use by Patients in KwaZulu-Natal: Obstacles for mHealth?"; and: "Language, Cultural Brokerage and Informed Consent: will Technological Terms Impede Telemedicine Use?".

Their research examined ethical issues related to the use of mobile phones by patients and an investigation of the effect of the lack of technical words in indigenous languages to validate patient consent for a telemedicine consultation.

The questionnaire covered topics such as demographics, mobile phone use, privacy and confidentiality and future use of mobile phones for health-related matters.

Research by Mars and Jack found that a third of participants shared their mobile phone with others, a quarter lent their phone to others and more than half received health-related messages for other people. This has significant implications for patient confidentiality.

Mobile phone theft was common as was number changing. Thirty-eight percent of the people were not able to afford airtime for more than a week in the past year and 22 percent of rural patients were unable to keep their phone charged. Mobile phone signal coverage was significantly worse in the rural areas than in urban areas.

Mars said the study highlighted the ethical ramifications that practices such as phone sharing would have on mHealth programmes in the province and the country.

‘Healthcare professionals need to consider how patients use and manage their mobile phones when developing mHealth services. We need to understand how people use their phones and be aware that people may be sharing phones,’ said Mars.

‘Care needs to be taken over the content of SMS text messages sent to patients so that we don’t put patients at risk if other people get their messages such as: “Please come and get your HIV medicines”. We also need to understand the culture of confidentiality in our local communities and understand who makes health related decisions - the individual, family or community.’

The second study explored a concern that the lexicons of African languages have not kept pace with technology and technological terms.

‘With over 2 000 languages in Africa we need to establish if patients understand what they are consenting to when they sign an informed consent form for a telemedicine consultation,’ said Mars. ‘This study in isiZulu is the only such study in an African language. Of great concern is that only 34% of patients understood the meaning of “consent” in their own language, and only 7.4% understood the meaning of the first sentence of our informed consent form which reads: 'I give consent to participate in a telemedicine consultation'.

‘We’re planning to conduct the same study in Rwanda, Mozambique, Uganda and Zimbabwe to see if it is a common trend or if there are any differences. It also raises the issue of the cultural interpretation of the word consent.’

‘We need to develop a simplified way of getting valid informed consent from patients in languages that don’t have words for relevant technology. We are working on a comic strip approach that combines visual messages with what is being said or read. We welcome input and collaboration from the greater University community in this endeavour,’ said Mars.

He believes mHealth has the potential to facilitate telemedicine services, particularly in the developing world. ‘South Africa currently has 96 registered programmes exploring the use of cell phones for the provision of healthcare. This is the second highest in the world after the USA.’

His work is internationally recognised and in recent weeks he has been an invited speaker in India, the Annual Grand Challenges Meeting of the Gates Foundation in Seattle, and the International Society for Telemedicine and eHealth Conference held in Paris in conjunction with Catel, the French eHealth Society.

Mars commended the work of Jack who will graduate in April next year.