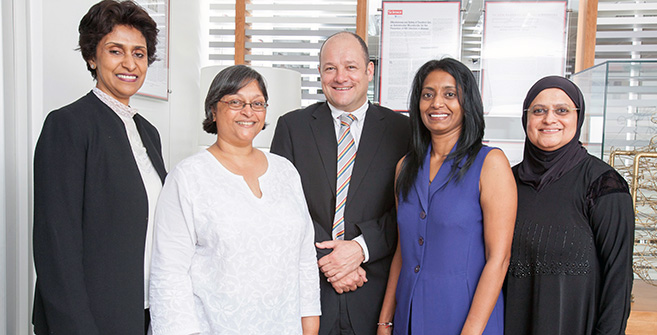 Three College of Health Sciences academics have been made members of the Academy of Science of South Africa (ASSAf) which also presented Professor Quarraisha Abdool Karim with a Gold Medal for outstanding achievement in scientific thinking to the benefit of society.

The new ASSAf members are the Dean of the School of Health Sciences and Professor in Pharmaceutical Sciences, Professor Sabiha Essack; Associate Professor and Head of Women’s Health and the HIV Research Unit at the Department of Obstetrics and Gynaecology, Professor Dhayendre Moodley, and Deputy Director of the Centre for the AIDS Programme of Research in South Africa (CAPRISA) and the South African Principal Investigator for the Columbia University-Southern African Fogarty AIDS International Training and Research Programme, Dr Nesri Padayatchi.

The three UKZN academics attended ASSAf’s Annual Awards and Inauguration Ceremony where Abdool Karim received one of two annual ASSAf Science-for-Society Gold Medals.  The other medal was awarded to Professor Jonathan Jansen, Vice-Chancellor and Rector of the University of the Free State and President of the South African Institute of Race Relations.

Abdool Karim and the three new Members were congratulated by the Deputy Vice-Chancellor and Head of UKZN’s College of Health Sciences, Professor Rob Slotow.

ASSAf was formed in response to the need for an academy of science in harmony with the dawn of democracy in South Africa – activist in its mission of using science for the benefit of society.

ASSAf states that the core functions of any national science academy require that the country’s most outstanding scholars are made members.

The Academy inaugurated 23 new members at this year’s ceremony, swelling its numbers to 445, all of whom are recognised as being among South Africa’s top scholars.