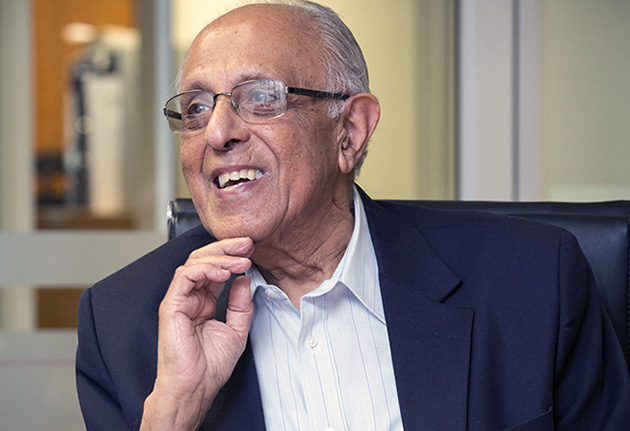 Dr Ahmed Kathrada recalls some of the funnier aspects of being a political prisoner on Robben Island.

“A Man for all Seasons”, Dr Ahmed Kathrada, visits UKZN

Dr Ahmed Kathrada, who was a close personal friend of Nelson Mandela and also played a leading role in the naming of the University’s Nelson R Mandela School of Medicine, recently spoke at a function hosted by the Centre for the AIDS Programme of Research in South Africa (CAPRISA) and UKZN’s College of Health Sciences.

The Director of CAPRISA, Professor Salim Abdool Karim, introduced Kathrada (fondly known as Kathy) to the audience as a ‘founding son of democracy in South Africa, an icon that made the country great.

‘The mark of true greatness lies in Kathy's humility and his passion to always do more for society,’ said Karim.

Kathrada recalled his life in prison and Nelson Mandela's words that political prisoners were not criminals and should fight a political case. 'Madiba always said to us; do not apologise, don't ask for mercy and always proclaim your political beliefs. He also told us to never run when called by the prison guards but to always walk tall with dignity.'

Mr Bonginkosi Mafuze, a fourth year UKZN Medical student, asked Kathrada what the role of the youth was in current day South Africa. Kathrada replied: 'Enjoy the freedom we never had before, however, note that with freedom comes responsibility. People died for this freedom - 700 children were killed during the Soweto uprising. Take advantage of your studies. Your university can give you the expertise you need to grow this country, especially as a health worker.

'Most important of all, people born after 1994 should stop blaming apartheid for their own weaknesses. One can overdo that until it becomes a habit. The remnants of apartheid are still with us but it is not an excuse to move forward.'

In 1963, Kathrada was charged with sabotage and attempting to overthrow the government by violent means; and sentenced to life imprisonment. For the next 18 years, he was confined to the Robben Island Maximum Security Prison along with most of his Rivonia Trial "colleagues". In October 1982, he was moved to Pollsmoor Maximum Prison near Cape Town to join others such as Mandela, Sisulu, Mhlaba and Mlangeni who had been moved there a few months before.

During his time on Robben Island and Pollsmoor, Kathrada completed Bachelor's degrees in History/Criminology and Bibliography as well as Honours degrees in History and African Politics. In 2002, he received an honorary doctorate from the former University of Durban-Westville.

Kathrada celebrates his 85th birthday this year and also the 25th anniversary of his release from prison.