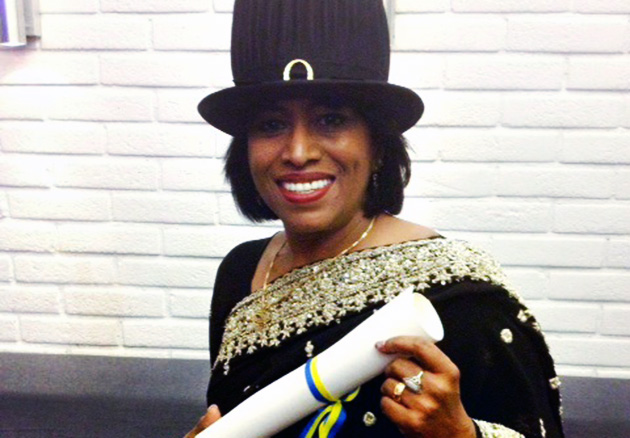 Social Work academic, Professor Vishanthie Sewpaul, who was recently acknowledged for excellence and scholarship in the School of Applied Human Sciences, was recently awarded an Honorary Doctoral degree from Mid Sweden University.

In awarding the degree, amidst a host of age-old European traditions, the University acknowledged Professor Sewpaul’s contribution to global social work, human rights and social justice, and more specifically to the critical and radical thrusts in teaching and research at Mid Sweden University.

‘It felt a bit surreal for a while. I was totally astounded when I received the news from Mid Sweden University as I was unaware of the nomination.  They had my CV as I served as a discussant for a PhD and gave some lectures there, and they were aware of my work on a global level.  On the basis of that, the Department of Social Work at Mid Sweden University nominated me.  I feel truly honoured to be acknowledged in this way.  It is something that rarely happens to academics so it is very special.’

Sewpaul’s family is both proud and overjoyed at her achievement. ‘There were lots of congratulations and well wishes; that I serve as a source of hope and inspiration.  My sister cried and said: “It’s about time!”  She said that she was so pleased that people were seeing what I was worth and rewarding me for it, and that if my mum were still alive she would be so proud of her youngest daughter.’

Social Work lecturer Dr Tanusha Raniga spoke highly of her friend and colleague, saying: ‘We are really proud that Prof Sewpaul was selected by Mid-Sweden University to receive an honorary doctorate. We believe that this is a well-deserved accolade as Prof Sewpaul’s passion for Social Work is evident in her scholarship, teaching and community activism, her service on several national structures in SA, in her role as President of the Association of Schools of Social Work in Africa and as Vice President on the Board of the International Association of Schools of Social Work.’

The College of Humanities Acting Dean for Research Professor Donal McCracken further added, ‘Professor Sewpaul is an excellent manager and leader. She has a profound and deep sense of justice which results in an ethical ethos permeating through any project she is associated with. We are proud to have someone of such standing in the School of Applied Human Sciences.’