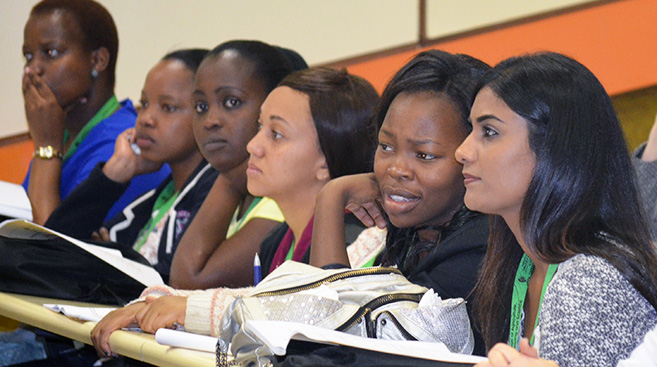 Postgraduate students at the College of Agriculture, Engineering and Science gave poster and oral presentations at the College’s annual Research Day held on the Westville campus.

Students were welcomed by UKZN’s Deputy Vice-Chancellor for Research, Professor Jonathan Blackledge, who described the day as a flagship event for the College, where the cream of its masters and PhD students showcased their cutting-edge research initiatives through about 50 oral and 70 poster presentations.

‘Knowledge leaders are essential in the rapidly changing and information-rich world of today,’ said Blackledge. ‘This annual Postgraduate Research Day, which is hosted by the College, is evidence of its commitment to nurturing young research minds. Participants, you are the knowledge leaders of tomorrow.’

Blackledge said the day provided a challenging and competitive environment for postgraduate students to present their scholarly work, via posters and presentations, to an academic but supportive audience, while at the same time disseminating knowledge.

He pointed out that the College led the University in the output of research and its number of masters and PhD graduands.  It also claimed 22 of the top 30 spots in UKZN’s leading researcher list and was home to six Department of Science and Technology and National Research Foundation National Research Chairs (SARChI Chairs).

There were more than 50 well-established research groups active within the College, he said, with research grants annually exceeding R200 million.

Presentations covered the full gambit of research being undertaken in the College in the fields of Engineering; Chemistry and Physics; Mathematics, Statistics and Computer Science; Agricultural, Earth and Environmental Sciences; and the Life Sciences.

Participants were assessed by a panel comprising both UKZN academics and industrial judges who hailed from a variety of companies, including Umgeni Water, the Council for Scientific and Industrial Research, Eskom, the National Research Foundation, the Technology Innovation Agency, the Water Research Commission, Pat Naidoo Consulting Engineers, and the KZN Department of Agriculture and Rural Development.  The judges were complimentary about the standard and quality of presentations and the variety of research being undertaken.

After an intensive day the function ended with the awarding of the prizes sponsored by the University Research Office, Schools within the College, as well as the Department of Science and Technology, the Department of Water and Sanitation, the Department of Agriculture and Rural Development, the NRF, eThekwini Municipality, CSIR, Thrip, Transnet, Inqaba Biotec, Whitehead Scientific, Reutech, DLD Scientific, Sasol, Illovo Sugar and Eskom.

Prizes included sponsorship to attend an international or local conference.

First prize winners in the oral presentations for the different sessions included:  Mr Simo Mthetwa  of the School of Mathematics, Statistics and Computer Science whose topic was: “Minimal Degrees of Faithful Permutation Representations of Finite Groups”;  Ms Lucy Ombala of the School of Chemistry and Physics, who spoke on “Nitrogen-Doped Carbon Nanotubes as Supports for Pd Nanoparticle Catalysts”; Ms Stephanie Hayman of the School of Agricultural, Earth and Environmental Sciences, who presented on the use of “Foraminiferal Assemblages in Determining the Palaeoclimatic Record of Two-Mile Reef, Sodwana Bay”, and Mr Chika Chukwuma of the School of Life Sciences, who spoke on the effect of “Xylitol on Normal and Type 2 Diabetic Rats”.

In the poster category, first prizes went to Ms Kimona Kisten of the School of Chemistry and Physics, whose theme was “Elemental Distribution and Uptake by Watercress (Nasturtium Aquaticum) as a Function of Water Quality”; and Ms Nolubabalo Ndlaliso of the School of Life Sciences, whose topic was “Modelling of Hydrogen Production from Synthetic Wastewater as a Function of Hydraulic Retention Time and Organic Substrate Concentration)”.

The event, attended by about 300 students, staff and industrial visitors, was declared a resounding success.  ‘The College pulled off a great Research Day,’ said guest speaker, Professor Kesh Govinder, who provided some fascinating insights into the concept of symmetry and its various applications to both physical and mathematical problems in his keynote address