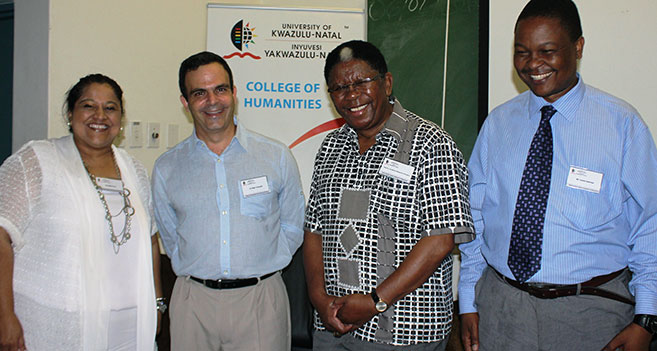 At the Colloquium are (from left) Ms Nadia Paul of the UKZN Foundation, Dr Alain Tschudin, Archbishop Njongonkulu Ndungane and Mr Lesiba Seshoka.

The colloquium, held at the Innovation Centre on the Howard College campus, commemorated the tenth anniversary of Hurley’s death and brought together theoreticians and practitioners from diverse disciplines and areas of engagement.

Ndungane, who officially opened the event, has been equated with Hurley in terms of their shared hallmark of “patient inclusivity” in the pursuit of social justice.

Ndungane said: ‘Denis Hurley was an intellectual, a man of integrity who used the Queen’s English very precisely and he was not shy to debate social and political issues.’

Speaking at the event, Executive Director of UKZN Corporate Relations Mr Lesiba Seshoka said UKZN had the privilege of Hurley’s profound wisdom and insights as Chancellor of the former University of Natal.

Gandhi shared her lessons learnt from Hurley stating that he had a deep compassion for people. ‘We need to do something to ease the suffering of our fellow man. Hurley’s actions really are a message to all of us and that is, we should act on what we learn and assist wherever possible.’

Academic and event organiser, Dr Alain Tschudin said: ‘Such solidarity, tirelessly promoted by Hurley, is the inspiration that steered our commemorative event, which actively sought to bring academics, practitioners, NGOs and community groups into dialogue to catalyse the meaningful societal engagement that is central to the vision and mission of UKZN.’

Hurley was the Chancellor of the former University of Natal from 1993-1998. Catholic Archbishop of Durban and fearless campaigner for justice and peace, he was recognised both at home and abroad for his promotion of human dignity.

Under his chairmanship, the slogan: “Community Serving Humanity”, was chosen by the Southern African Catholic Bishops’ Conference to promote their pastoral plan in the pre-democratic, apartheid South Africa of the 1980s and 1990s.

Tschudin added: ‘Ten years after the passing of Denis Hurley, who steered both the University and his Archdiocese through the stormy years of transition and change, it seems appropriate to re-visit this slogan. To what extent do we live in community? Are these communities of service? If so, whom do we serve; humanity, sectarian interest or individual self-promotion? Going beyond this, “the Arch”, as he was affectionately known, was renowned for his “bigger picture” thinking.’

Regarded as ‘one of our greatest South Africans’ by Nobel Peace laureate Archbishop Desmond Tutu, Hurley denounced apartheid as “intrinsically evil” and spent his life fighting for the restoration of human dignity for all.

In the 20th anniversary of the country’s fledgling democracy, the event proved to be a fitting celebration that both commemorated and promoted Hurley’s powerful legacy.