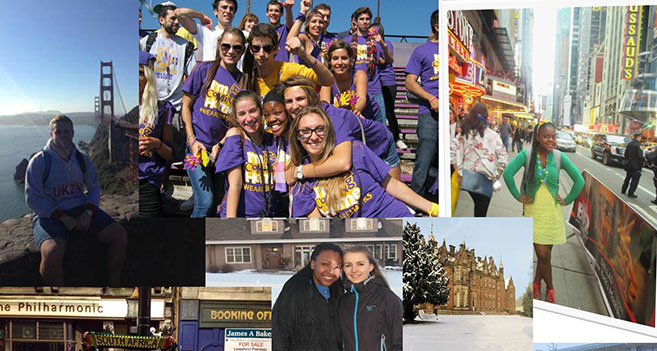 UKZN exchange students around the world.

Fifteen UKZN students spent a memorable semester abroad as part of the University’s student exchange programme visiting countries such as the United States, Sweden, the United Kingdom and Canada.

Ms Zanele Njapha (aka Zayne), who spent a semester at Wilfred Laurier University in Ontario, Canada, visited Niagara Falls as part of the University’s Orientation programme.

As a way to connect with home and share her culture with other students, Njapha joined the African Students Association at the University of Waterloo and was part of a fashion show showcasing African designs.

Mr Richard Morrow, a student from the College of Humanities, visited Uppsala University in Sweden. Founded in 1477, the University is in a picturesque university town and boasts the founder of Skype, Niklas Zennström, as a former student.

Challenges faced included dealing with new responsibilities, being far away from home and adjusting to an academic system centred around self-study.

Using Sweden as a base, Morrow was able to travel extensively in Europe. He got to the South Africa-Wales rugby game in Cardiff, visited Edinburgh Castle, rode dog-sleds and saw the Northern Lights at the Arctic Circle. Other highlights included having reindeer pizza and staying in a teepee (tent) at the Arctic Circle.

‘The best part was meeting different people. I have learned things that no book could teach me.’

He encouraged other UKZN students to become part of the exchange programme. ‘To prospective students – go for it. It’s a once in a lifetime opportunity!

Ms Sithulile Mbali spent four months at Keele University in the United Kingdom. While she was a bit lonely initially, she soon grasped the opportunity and immersed herself in drama, music, dance and having fun. She particularly enjoyed attending seminars as part of film-class.

‘I was a bit too focused, I should have explored more!’ Mbali said. ‘All you need is the right attitude and to open your mind,’ she added.

Ms Hlengiwe Mkhwanazi was at the University of Calgary in Canada where she majored in Political Science and Anthropology. ‘The professors were amazing!’ said Mkhwanazi. She added the standard was highly competitive, with everyone aiming for an A-plus. 'It made me work harder than I do here [at UKZN]'. She also found it necessary to read a lot to maintain good grades.

The weather proved challenging, with temperatures dropping to -30 degrees Celsius! Mkhwanazi explained that the University of Calgary had an innovative way of dealing with inclement weather, including underground tunnels connecting most buildings on campus.

Mr Chadley Allkins was at Drake University in Iowa in the United States and managed to get in a fair bit of travelling in his spare time. He visited San Francisco, Disney World, Los Angeles and Chicago. ‘Seeing the sights and travelling made memories we will carry with us for the rest of our lives,’ said Allkins.

He experienced personal growth while abroad including being independent and taking on more responsibilities. He also learned how to budget and handle his own finances. The highlight of his trip was forging friendships with other students.

Challenges faced by Allkins included an epic 32-hour journey from Durban to Des Moines, Iowa; dealing with diverse room-mates; and “schooling” people on South Africa. ‘People were ignorant of everything that’s not American.’ Lecturers also had contact sheets with student’s photographs and ‘knew everything about you’.

He also noticed that the University was more technologically focused - every student had a laptop in class, and no-one took notes the traditional “pen and paper” way. Students also received quizzes via email.

Millersville University in the heart of Amish farming lands in Pennsylvania in the United States was home for exchange student Ms Philile Kubheka.

‘The education system was very different to South Africa – there was lots of student participation and small classes.’ She also found the workload to be very heavy, but enjoyed the less formal student-lecturer relationship.

Kubheka experienced a culture shock, particularly in adjusting to the food and weather.

‘The experience was rewarding academically and personally,’ said Kubheka.

Mr Yamkela Zitwana was also at Millersville University where he forged friendships with students from all over the world, including Scotland and Spain.

He found that South Africa had a good reputation in America. ‘They like South Africa. They think we all have gold and diamonds,’ laughed Zitwana.

Zitwana found his GIS classes challenging and thoroughly enjoyed fieldwork and being in the Geography Club on campus.

Student Exchange and Study Abroad Co-ordinator, Ms Preshantha Reddy, said exchange students were selected on academic merit, their letter of motivation, academic references and their performance in an interview.

The applications to go abroad for Semester Two 2014 are now open. Students in their second year of study onwards and who meet the academic requirement of a 65% average are welcome to apply.

For more information on applying for one of the coveted spots, e-mail Ms Reddy at: ukznsep@ukzn.ac.za