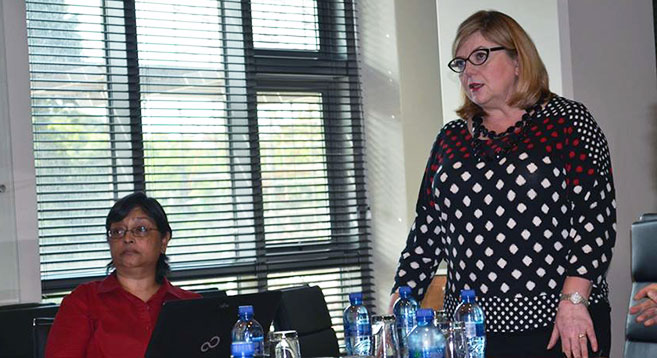 CAPRISA Hosts Lecture on Contraceptives by US Professor

Changing the contraceptive mix in high incidence HIV populations was the title of a CAPRISA - hosted lecture by Professor Sharon Hillier at the Nelson R Mandela School of Medicine,

Hillier’s lecture reviewed HIV statistics and fertility control methods used by women in South Africa and several other African countries.  She reviewed data that suggests that women who use Depo-provera (DMPA), the most commonly used contraceptive method in Africa, had an increased risk of acquiring HIV infection.  This placed young women in Africa with some tough choices in terms of reducing their HIV risk and preventing unwanted pregnancies.

Hillier is the Vice-Chair for Faculty Affairs and the Director of Reproductive Infectious disease research at the University Of Pittsburgh School Of Medicine. She is also a professor of Obstetrics, Gynaecology and Reproductive Sciences, and of Molecular Genetics and Biochemistry.

Her main research interests focus on infections of pregnancy complications and their part in genital infection and susceptibility to human immune deficiency virus (HIV). She is the principal investigator for the NIH-funded project to develop a topical microbicide barrier against HIV.

Hillier, who received her undergraduate and doctoral degrees in Bacteriology and Public Health from the Washington State University of Pittsburgh, has authored and co-authored more than 400 articles for books, peer-reviewed journals and online articles.

Her review of characteristics of women who were more likely to be HIV infected in Africa highlighted that the highest risk was in young unmarried women under the age of 25 years compared to married women and women older than 25.

Her review of published data on fertility control methods showed that Depo (DMPA), which is a hormonal contraceptive, was seen to increase women’s susceptibility to HIV, more so than oral contraceptives.  Hillier expressed surprise that although IUCDs (Intrauterine contraceptive devices) and implants were available to prevent pregnancy, they were not being dispensed.

Based on this concern, the Microbicide Trials Network (MTN) that Hillier co-chairs, decided to train the MTN study staff on an expanded contraceptive method mix and set a goal of reducing Depo use by 50% a year ago.  In less than a year, large numbers of Depo and oral contraceptive users have started using Implants and IUCDs through this intervention.

Hillier explained that the use of IUCDs was a highly effective form of birth control, as were Implants, and that staff training was important for implementation.