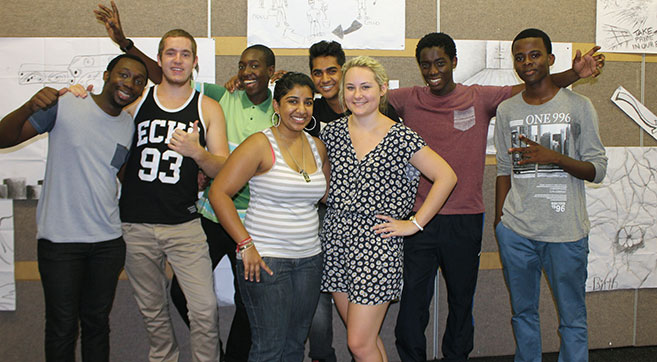 A group of first year Architecture students show off their drawings during an ice breaker workshop.

Architecture Students get their Hands Dirty

Students were put into large groups and asked to brainstorm ideas and create a paper mache model according to the theme of “Otherwhere”.

They were also given specific topics: Ecology – time, evolution; Resilience –emergence, poverty alleviation, the spatial economy, and Values – humility, respect, diversity, ethics, in which they could get as creative as possible with the help of Architecture masters student group mentors.

Day one of the programme saw students create a rough drawing on recycled paper according to their topics and thereafter collectively create a story stemming from the images.

Day two began with students designing and creating a relief sculpture from paper mache with the final day leading to a presentation of the final product to a panel of keen art critics in the Architecture studio.

She also advised the students to ‘live and breathe architecture’ and to learn as much as possible.

First year students Ms Caylin Sprighton and Mr Treven Moodley chose Architecture as they hoped to design and create beautiful spaces to live in and future city landmarks that could stand the test of time.

‘Architecture provides the best of both - it allows you to grow academically yet still allows you to be creative. As first years we’re fully aware of the implications and hard work that go into studying Architecture, and if you have passion for what you’re doing then success is guaranteed,’ said Sprighton.

Asked about his future plans, Moodley said: ‘I hope to finish my masters and someday open up my own practice and eventually build a landmark putting South Africa on the map. But, for now, as a student I plan on doing internships to gain experience and make contacts in the industry.’