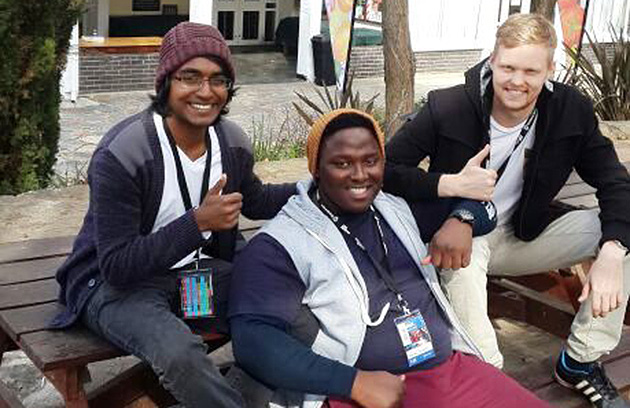 Three UKZN Music students - Mr Jude Ganasen, Mr Rogan Van de Burg and Mr Dalisu Ndlazi - recently attended the Grahamstown National Arts Festival where they were given the chance to audition for the National Youth Jazz Band, which recognises the best young musicians in the country.

They all advanced to the second round of auditions, with Ndlazi making it to the finals.

As part of the Standard Bank National Youth Jazz Festival, the students were also given the opportunity to participate in a variety of workshops, performances and open rehearsals with world class musicians from a variety of countries.

With the teaching programme being a critical component of the Festival, workshops were offered in jazz history, theory, practice and its associated disciplines such as sound engineering and management. Seminars were held with a focus particularly on South African jazz heritage.

Ndlazi said: ‘It was life changing to be part of the Jazz festival and all the other art forms. I went to workshops every day, had band rehearsal every day, and I watched shows every evening. We learned a lot about what happens in the music business and what to watch out for as well as how to sustain our careers as musicians.’

UKZN Concert and Jazz Centre Co-ordinator, Ms Thuli Zama, accompanied the students on the educational trip and was able to network with colleagues nationally and internationally in an effort to strengthen relationships with stakeholders for future prospects.

Zama believes UKZN Music students should attend the Festival annually to take advantage of interaction with local and international musicians and teachers as well as to assess themselves against their peers.

‘It was a very motivating experience. We always try and expose our students to educational workshops and trips available country-wide. And we hope to return to Grahamstown next year and attend other events such as the South African Jazz Education Association (SAJE),’ said Zama.