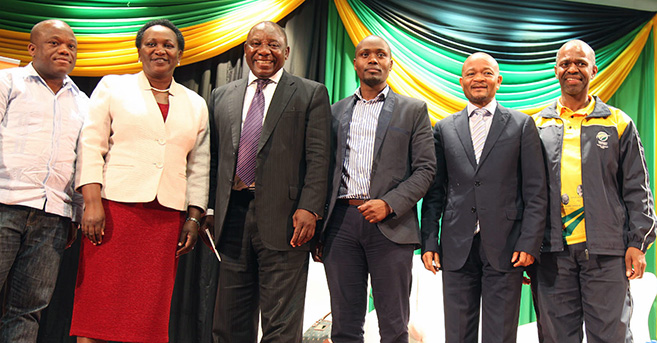 Professor Betty Mubangizi was a member of a high powered panel which reflected on Mandela’s legacy in a political discussion hosted by the African National Congress (ANC) at Durban’s City Hall recently.

Mubangizi was on the panel in her capacity as a public servant, a public administration researcher and educator, and a UKZN School of Management, Information and Governance academic.

The KwaZulu-Natal’s provincial office of the ANC has monthly series of unmediated forums which help us to articulate state policies and also to educate people in that regard. As part celebrating the life of South Africa’s first democratically elected President, the late Dr Nelson Mandela whose birthday is on July 18, the ANC hosts a forum looking at his legacy. The topic for the July forum was: “How best can we preserve Mandela’s legacy?”

The Deputy President called on the public to reflect on Madiba’s legacy and urged South Africans to follow the teachings of Nelson Mandela who he described as an iconic leader and a great mentor.

In her address titled: “Maintaining the Mandela Legacy – A Public Administration Context”, Mubangizi addressed the packed hall on the pivotal role leadership and good governance played in building a better society for all the people of South Africa.

Mubangizi highlighted the importance of building a capable state and, as an academic in Public Administration, welcomed the idea of this thrust being properly articulated in Chapter 13 of the National Development Plan. She suggested a three pronged approach on developing a capable state by professionalising the public service – notably; policy and legislation; norms and standards as well as cultural cognition.

Professor Mubangizi added that community involvement and valuing public servants were also important aspects and reminded the audience that ‘Nelson Mandela took every opportunity to assure civil servants that they were valued and that their work was appreciated.

‘Let us be vigilant in nurturing our public servants for they are the key to the National Development Plan Vision 2030.’

However, while a large responsibility for implementing the National development Plan lies with public administrators and policy makers, it is important that the Plan be seen as a lasting vision for all South Africans. It is a plan for everyone. Giving effect to it is therefore every citizen’s responsibility,’ she added.