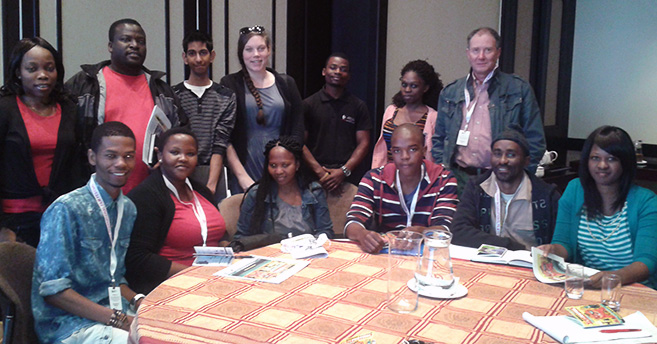 A team of students who are part of the Durban International Film Festival (DIFF).

A team of students under the wing of UKZN’s Centre for Communication, Media and Society will again report on the Durban International Film Festival (DIFF).

This project was first organised for the 2013 festival as a way of offering students real world journalism experience;  helping them build their portfolio for employment applications and for them to be located in the thick of the film, TV and video industries.

Student interns have been selected for and trained in the following fields: Journalism / Film Reviews, Communication Management, Events Management and Organisational Communication.

CCMS is working with DIFF to manage a newsroom of selected third year and honours students to write reviews on the festival and its films, panels, directors and actors. Their stories will be submitted for publication to various newspapers; the CCMS magazine, SUBtext, and entered onto the African Cinema and TV page on the CCMS website, that has entries on 10 000 titles.

isiZulu-speaking students have been encouraged to also write for the Isolezwe newspaper.

The Journal of African Cinemas will consider substantive reviews while qualifying reviewers will be supported by an experienced team of CCMS-based sub-editors and senior film students who are also lecturers.

Professor Keyan Tomaselli, who is coordinating the initiative, said: ’The project will mimic a real-world media newsroom. The workshop will equip aspiring DIFF reviewers and reporters with skills they need to write effectively for specific readerships under tight newsroom deadlines within a professional  supervisory structure.’

Four honours students will use the Festival as a research site in their analysis of Durban as a ‘Film Friendly City’.