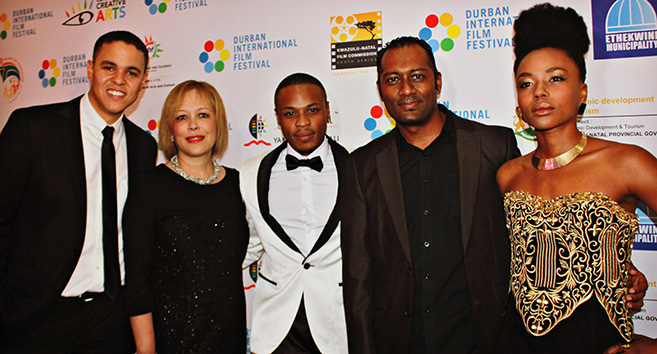 The 35th Durban International Film Festival (DIFF) opened at the Suncoast CineCentre with the world premiere screening of the highly anticipated action romance movie Hard To Get from young Director Mr Zee Ntuli.

Ntuli and the talented cast walked up the red carpet to their seats in the cinema which created a great buzz of excitement among the capacity audience.

The film tells the story of TK, a handsome, young womaniser from a small community who falls for a sexy, reckless young thief named Skiets. Thrust into Jo’burg’s criminal underworld TK realises that his best bet is to trust her and hang on for dear life.

Addressing the audience on opening night, Deputy Vice-Chancellor and Head of the College of Humanities, Professor Cheryl Potgieter said: ‘The Film Festival is a major contributor to social cohesion and is crucial to nation-building. In light of our 20 years of democracy, there is a generous spread of documentaries that shows where we have come from and the progress the country has made. As UKZN we are proud to be associated with DIFF and we will continue to work with our partners to further grow the Festival.’

Festival Manager Mr Peter Machen also spoke on South Africa’s 20 years of democracy, tying it in with the film festival which he described as a critical voice for change in a young nation that’s still struggling to find its democratic footing.

‘Films have the ability to change us on a personal level and can be seen as an agent of change. They are both an expression of freedom and an enabler of it,’ he said.

* The 35th Durban International Film Festival is organised by the Centre for Creative Arts at the University of KwaZulu-Natal and is a special project of Professor Cheryl Potgieter.