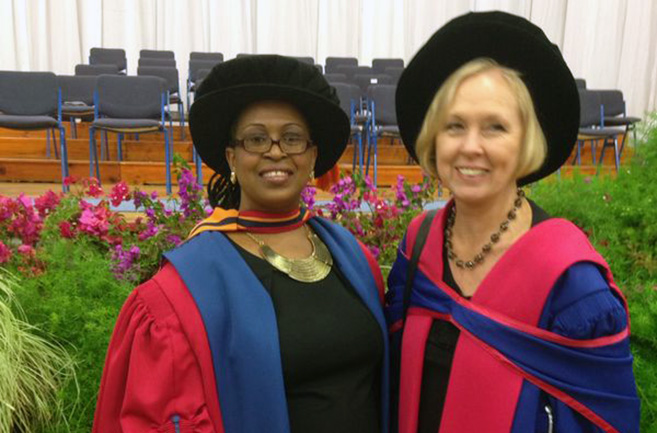 Doctor of Philosophy in Education graduate Dr Thoko Mnisi says even though HIV and AIDS-related stigma has changed since the emergence of the epidemic, it is still an issue people living with the disease have to contend with.

Mnisi’s study titled: “Digital Storytelling to Explore HIV and AIDS-related Stigma with Secondary School Learners in a Rural Community in KwaZulu-Natal”, prompted her to contribute to addressing the challenges presented by HIV in a form of research.

Elaborating on digital storytelling to explore the stigma, Mnisi said: ‘This stigma is, however, contextual and how the individual is stigmatised fits in with the language, meaning and thought that a community constructs around stigma.

A qualified Teacher and Researcher currently working as a Principal Administrative Officer at the University Research Office, Mnisi said digital storytelling involved sharing stories about, and experiences of HIV and AIDS-related stigma and how these stories could be used as part of the solution.

‘If such stories can be told, people can spread them just as gossip is spread, but in this case such spreading would work towards positive social change. In order to confront the challenges raised by the perpetuation of stigma, efforts must involve the communities and must tap into their own experiences of perpetuating or enduring stigmatisation.’

Mnisi said her interests in the topic started in high school but her career took a different turn. She then reunited with the topic when she was studying towards her honours degree.

‘I was approached by Professor de Lange when I was about to start my research project for the honours degree and she offered me an opportunity to analyse some existing data sets for a project she and other researchers were doing.  I would say, it was after this, that I never looked back because then in 2008 I was offered an NRF grant-linked bursary by de Lange.’

Mnisi says studying comes with its own challenges. Hoping to study full time and still provide for her five boys who needed her support socially and financially proved difficult. She says there were points in her life where she felt she was not going to complete her PhD studies.

‘Yes, it was very tough to survive on a grant-linked bursary hence I had to work day and night to ensure my children were not affected financially, yet on the other side that meant not being there for them physically.’

She says another challenge was doing different jobs concurrently with her studies which called for her constantly wearing different caps.

‘My opinion is that there is nothing more fulfilling than studying.  I am not saying this from a point of selfishness, but I learnt from my late parents that education is the only achievement you can claim! Over and above, I also realised that through studying I grow every day and view issues in a more philosophical manner,’ said Mnisi.

Her family was her main source of support and she also thanked her colleagues, the academics and most importantly her supervisor for their mentoring and support throughout her studies.