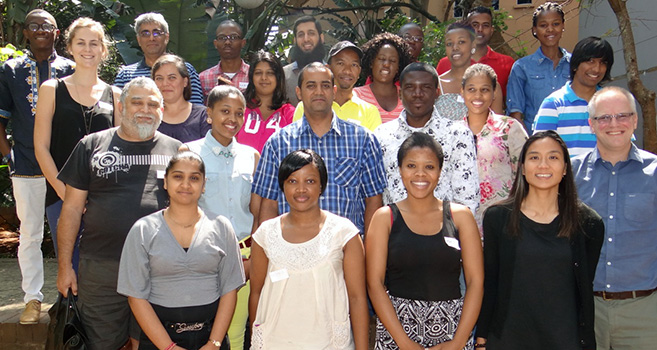 The UKZN team involved in the eThekwini Medium and Large Manufacturing Survey.

With important collaborative and financial support from the eThekwini Municipality, the Employment Promotion Programme, the National Research Foundation (NRF), the provincial Department of Economic Development and Tourism and the national Economic Development Department, the survey is collecting data on the current conditions of various sectors within the manufacturing sector in the region.

The survey also aims to follow up with establishments from a 2002/2003 survey and to demonstrate the dynamic picture in manufacturing sectors such as clothing and textiles, agro-processing and metal works. This component of the survey will, for example, allow the researchers to understand changes in employment levels within manufacturing firms.

The survey analysis will provide policymakers, the business community and researchers with valuable insights into the efficacy of current industrial policies, and provide a valuable resource for research on the focus of future policies for industrial development. The survey also positions the city of Durban as one of the few local governments with panel data on manufacturing firms.

‘The project also seeks to build capacity, such as training of these students and of some staff at eThekwini’s Economic Development and Investment Promotion Unit,’ said Valodia.

The project was launched at the 3rd Economic Development & Growth in eThekwini (EDGE) breakfast seminar, hosted by eThekwini Municipality and UKZN.

The seminar, themed: “Making Industrial Policy Relevant at the Local Level”, welcomed guest speaker, the acting Deputy Director-General of the Department of Trade and Industry, Mr Garth Strachan, who helped unpack problems, the new industrial policy context, and other matters as they are experienced on the ground by medium and large manufacturing firms.

For more information, refer to the project website:  http://firmsurvey.ukzn.ac.za/

- Melissa Mungroo
In This Issue